It’s tough to re-create history with buildings and costumed people and not have it seem theme-parkish, but when it’s done well, there’s no better way to engage kids in another world and time.

Here are a few places where families can meet history face-to-face, in a largely outdoor setting so you don’t have to keep saying “Shhh!” and “Don’t run!”

** Bunratty Castle and Folk Park. The 1800s-era Folk Park is laid out around Bunratty Castle, built in 1425 and the “most complete and authentic medieval fortress in Ireland.” My family took a long weekend trip to the Shannon area of western Ireland and this attraction was a big winner. It’s an Irish “living village” of homes, businesses and people; very accessible to children.

** Edo-Tokyo Museum. “Edo” is the old name for “Tokyo,” and this museum captures many different historical periods in this sprawling Japanese city, including temples and apartments. The main indoor museum has wonderful re-created street scenes and exhibits, but there is a branch in western Tokyo called the Edo-Tokyo Open Air Architectural Museum that has many more buildings and artifacts. The Web site is in Japanese, but Metropolis Tokyo (sort of like Time Out) has a great description of park highlights. Japan-Guide.com lists other open-air museums in Japan.

** Old Sturbridge Village. Often considered the granddaddy of U.S. open-air living museums, I even remember visiting this New England history stalwart as a child and getting my first horehound candy stick. From their Web site:

“The period portrayed by Old Sturbridge Village, 1790-1840, is of major significance because it was a time in which the everyday lives of New Englanders were transformed by the rise of commerce and manufacturing, improvements in agriculture an transportation, the pulls of emigration and urbanization, and the tides of educational, political, aesthetic, and social change.”

Translation: there’s a lot going on for kids of all ages to watch, participate in and enjoy.

** Bokrijk. This park is in a little section of Flemish Belgium near the town of Hasselt, not far from the Dutch border (and hopefully Belgium as a nation will get over its current French/Flemish tiff.) Only open March-September, it features 3 different villages complete with daily life, farming, cooking demonstrations and handicrafts. The “Haspengouw” represents “grandmother’s life” about 100 years ago. 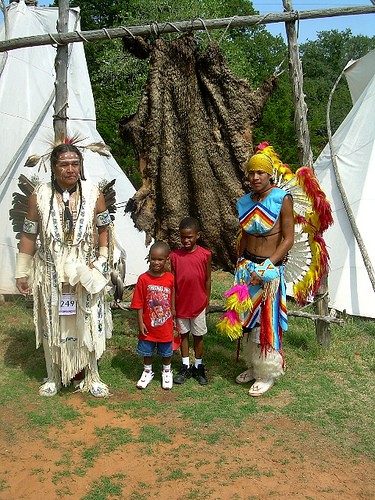 ** Indian City USA. In the southwestern Oklahoma town of Anadarko, there are seven different tribes within a 30 mile radius. At this popular attraction with the unfortunate billboard-y name, Plains Indian tribe members give tours of their authentically re-created living areas, encompassing the Navajo, Chiricahua Apache, Wichita, Kiowa Winter Camp, Caddo, Pawnee and Pueblo Villages. Sure, it’s culture compressed, but if you’ve ever driven across the hundreds and hundreds of miles of central US highways with itchy, bored kids, you’ll appreciate some one-stop history of the native Americans on the Great Plains.

** Norsk Folkemuseum. I keep seeing Oslo popping up in travel magazines these days, but we found it first! 🙂 One of the highlights of our trip was this outdoor museum of 155 traditional Norwegian buildings, including a lovely wooden stave church. Many of them are occupied with costumed interpreters doing crafts and cooking (yes, it was great even in the winter snow, when we visited in March.) Where else could you “tour Norway in one day?”

** Virginia’s Historic Triangle: Colonial Williamsburg, Jamestown and Yorktown. I’ve written before about what a terrific place this is for kids, but with the holidays approaching, I encourage you to visit this part of Virginia that recreates the 1600s and 1700s. Colonial Williamsburg in particular does distinctive holiday special decorations and events.