A day out with kids in Austin, Texas 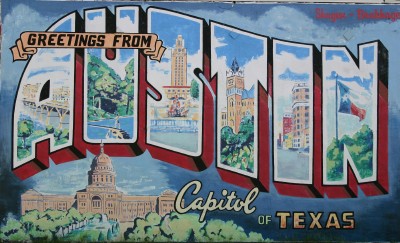 I don’t know about you, but lack of time and cash flow have both combined to really crimp the ol’ travel plans this winter.  Too bad, because you can find lots of bargains in January and February, when many places are in the off-season and people are busy cocoon-ing in their houses.

This past weekend, we had a nice Saturday in downtown Austin, Texas, and even though it wasn’t a “trip” per se, it was at least a day out of the house despite rather crummy weather.

Our main reason for heading downtown was a summer camp fair sponsored by Austin Family Magazine. Yes, it’s already time to think about summer camp options, and we wanted to get on the ball because I’ll quite cheerfully admit that we blow it every year and my kids tend to end up in front of video games instead of leaping into some Hill Country lake, as they should be doing during a sweltering Texas summer.

If we hadn’t gone to the fair, we still might have had some fun at the excellent Austin Children’s Museum or maybe the Bob Bullock Texas State History Museum, which has three floors of exhibits and a popular IMAX theater.

The Texas Capitol is also in Austin and is always good for a stroll, especially when the Legislature is in session. There’s a good Visitor’s Center to get you started.

We also keep meaning to check out the O. Henry House (the famous author lived in Austin for awhile) but I particularly want to take the family to see the annual O. Henry Pun-Off, held every May. My Sainted Husband and son adore puns!

As for our personal excursion, once we finished at the camp fair, we drove over to Zilker Park to see if anyone was swimming at Barton Springs, a lovely freshwater spring pool that is open year-round, with a constant 68 degree F water temperature.

That means that on a 45 degree day, the water feels positively balmy, and we watched a couple of lap swimmers motoring through the 3 acres of clear spring water.

(We also needed to make a bathroom call for the kids. Don’t they ever go at a convenient time?)

After admiring a nice view of the Austin skyline from Zilker, we headed back down Barton Springs Road to find some dinner. Local Tex-Mex joint Chuy’s is a perennial hit (the downtown location has a room with the entire ceiling covered in car hubcaps) but I was feeling burger-y so we went to Hut’s on Sixth Street.

It’s been around forever and serves up excellent burgers, fries and humongous onion rings. The waitstaff is friendly and efficient, and there are lots of kids.

We wanted a reasonably quick turnaround, because we were wrapping up the day at the venerable Paramount Theater on Congress Avenue – they were playing a beautifully restored 70 mm version of the movie West Side Story, on a big screen, the way it was meant to be seen. My nine-year-old son likes music and dance, and he loved it.

The Paramount has a popular summer film series that’s a don’t-miss here in Austin, but they play special movies throughout the year plus lots of superb live performances, many quite family-friendly. The theater’s Executive Director even writes an excellent blog, Off-Stage with Ken Stein.

My Dad went to the Paramount as a child, and he always comments that his first movie there was Frankenstein Meets the Wolf Man, which apparently scared the daylights out of him.

I promise future Austin and Texas highlights, as we continue to travel close to home. Let me know if you have any particular requests.