A magical visit to Hayao Miyazaki’s Ghibli Museum in Japan 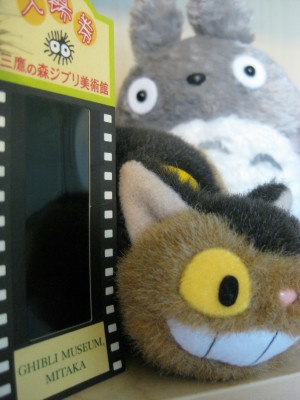 The Disney release of the movie Ponyo (here’s an extensive fan review on the Ghibli Blog) has heightened interest in its creator, animation master Hayao Miyazaki, and his Japan-based company Studio Ghibli.

You can visit the Ghibli Museum in Mitaka (a western suburb of Tokyo) to see a spectacular facility dedicated to the wonderful art of Miyazaki’s hand-drawn animation. Opened in 2001, it gives you a stunning peek into the mind of the reclusive Academy Award-winning artist.

My daughter, her cousin and I visited a few years ago and we absolutely loved it. Miyazaki calls it “the kind of museum I want to make….a building put together as if it were a film.”

In addition to the imaginative, swoopy, playful storybook architecture of the building itself, there’s the 80-seat Saturn theater with Museum-exclusive short Miyazaki films (in Japanese but I assure you, it doesn’t matter) exhibits and displays about art and animation, the Straw Hat cafe, a toddler playroom with a giant plush Catbus to jump on, and the “Mamma Aiuto” gift shop that requires sumo training to handle the large, polite but persistent crowds.

I don’t have interior photos or video because it’s not permitted by Museum policy (they want you to relax and enjoy, not record things.) You can buy a souvenir booklet in the gift shop, with plenty of pictures.  We loved the handcrafted fixtures made of stained glass, the stairway mazes, the water handpump on the patio, the many ceiling paintings and the bright colors throughout.

Your admission ticket, as seen in my photo above, is an actual piece of 35mm film from one of Miyazaki’s movies.

Admission is by dated, timed tickets, so if you’re in Japan, order them at any Lawson’s (a Japanese convenience store similar to 7-Eleven.)  You can also purchase them from travel agents; this page on the Ghibli site explains ticket purchasing.

You exchange that paper coupon for the film clip souvenir ticket at a Totoro-themed admissions booth at the Museum entrance (which is also an excellent family photo opp since pictures are permitted there.)

It’s not hard to get to the Museum, which is located in pretty, green Mitaka Inokashira Park.  Take the JR Chuo Line to Mitaka station (about 20 minutes from Shinjuku station.)  Exit from the Mitaka South Exit and walk about 15 minutes along the Tamagawa Josui “Waterworks” to the Museum. There is also a bus that picks up at the station.

All Museum facilities are wheelchair-accessible except for the roof garden, which is reached by stairs.

Spending time at the Ghibli Museum will be a highlight of your family’s visit to Tokyo, even if you’ve never seen any of his movies.  Miyazaki speaks a universal language of wonder.