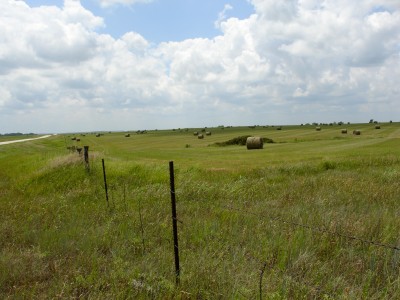 The first thing to address is the term “Flint Hills;” yes, indeed, eastern Kansas has hills.

It is definitely not all flat cornfields as many think, including me before I came here. The prairie has a lot more personality than that. Travel writer Rolf Potts grew up near here and lists the Flint Hills as one of ten spots to revel in America.

After we left the site of the original Little House on the Prairie in Independence, and my teenager made her midnight rendezvous with Harry Potter at an Emporia bookstore, it was time to drive a little of the Flint Hills National Scenic Byway (Kansas Highway K-177) and investigate some small towns along the way.

I wish we’d had more time in Emporia to explore the home of Pulitzer Prize-winning Emporia Gazette editor and author William Allen White, but we’ll just have to come back.

After my daughter’s all-night Harry Potter read-a-thon (from just after midnight until she finally shut the book, having finished around 9:30 — yes it’s nice to know that my generally obsessive personality has carried over to her quite well) we loaded up for Cottonwood Falls.

There’s not a whole lot going on there, especially on a sleepy Saturday around noon, but we admired the ornate Chase County Courthouse and had a pleasant lunch (and a lot of coffee!) at the swanky Grand Central Hotel. It seems a little strange to put an upscale hotel here, but there were plenty of people in it, so hurray for the money they bring to the area.

Just a mile or two up from Cottonwood Falls is the headquarters for the Tallgrass Prairie National Preserve. From the Web site,

“The preserve protects a nationally significant example of the once vast tallgrass ecosystem. Of the 400,000 square miles of tallgrass prairie that once covered the North American Continent, less than 4 percent remains, primarily in the Flint Hills of Kansas.”

There are three guided bus tours that take visitors away from the main Preserve building and out into the prairie, trackless and mostly treeless, as it has been for hundreds of years. The rocky soil made this part of Kansas unsuitable for plowing but great for cattle grazing (and bison grazing, when bison still roamed here.) This saved it from development. 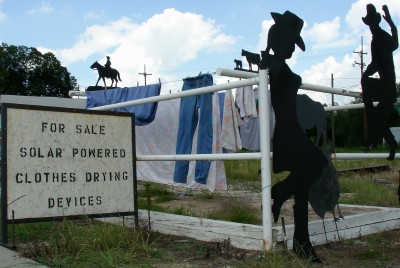 I liked the silence, the constant breeze, and that the prairie grasses are their own ecosystem, with all sorts of plants and bugs and critters moving around if you bend down and watch closely for awhile.

It’s like the ocean; a vast nothingness until you pause and take a closer look.

We kept driving up K-177, taking in the views, until we reached Council Grove, a resupply and jumping-off point for the Santa Fe Trail (complete with the small Last Chance general store.)

There is a self-guided driving tour set up to see the major sites and buildings; pick up a map and tourist info at the Kaw Mission building.

You can catch a bite to eat at Hays House Restaurant and Tavern, which claims to be the oldest continuously operating restaurant west of the Mississippi.

Yes, you can order a buffalo burger here, but we had to get going to reach Kansas City.

For more detailed info by a local guy, check out Bill Smith’s fun blog The Flint Hills of Kansas.

If you have an opportunity to even just drive through the Flint Hills, get off of the Interstate and do it. It will really give you and your family an appreciation for our country’s pioneer heritage.