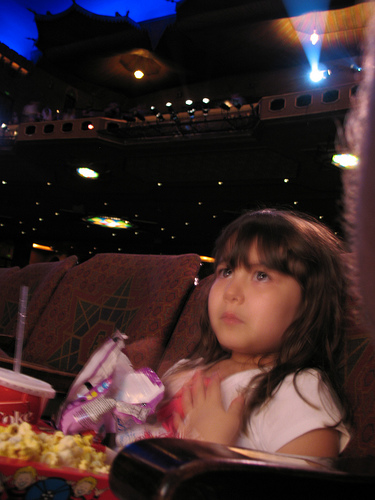 There is great excitement in our household – the schedule was released yesterday for the annual Summer Film Series at our downtown Paramount Theater in Austin.

Everyone wants to see Mary Poppins on the big screen, especially our favorite number set on the rooftops of London, “Step in Time.”

Sainted Husband and I are wondering if our 9-year-old son is ready for getting through Casablanca without his teen sister (and us) smacking and shushing him too much. I’m going to try to explain Free and Occupied France during World War II and show him a map of Morocco ahead of time, so the story makes sense.

I want to see From Here To Eternity on the big screen; maybe a date night?

And that’s just on the first weekend of the series, in mid-May. Bliss!

In June, we’ve got to go back for Fiddler on the Roof, perhaps the Streisand weepie The Way We Were (get my teen surreptitiously bawling, I’ll bet) plus Singin’ in the Rain, the hilarious Some Like it Hot….the Paramount even brings in live musicians to accompany some of the silent movies, and they sometimes show old cartoons before the movie instead of obnoxious multiplex-like ads.

My Dad, a native Austin-ite, still talks about the first movie he saw at the Paramount, when it was called the Majestic; “It was Frankenstein Meets the Wolf Man in 1943. Scared the hell out of me!”

The Executive Director of the Paramount, Ken Stein (who writes the fun blog Off-Stage with Ken Stein) freely admits that the Summer Film Series is not so much a money-maker as it is a way to keep the theater active during slow summer days, and to bring people into the Paramount who may have never considered going. Once patrons see the gorgeous interior and enjoy their experience (without a big entry price, either) they often come back for the more expensive concerts and performances at other times of the year.

Does your town, or one nearby, have a classic theater like the Paramount, or maybe the beautiful Art Deco Fox Theater that I just visited in downtown Hutchinson, Kansas?  See if they have any classic summer movies, and take your family to see them as they were meant to be seen, on a truly large screen in a lovely theater.

If they don’t, well, try to convince the owner/manager that such events help to draw people into sometimes-struggling downtown areas that are working on redevelopment.

When you travel, even to small towns, poke around ahead of time to see if there’s a classic downtown theater that has something going on while you’re there.

A few positive movie experiences can make lifelong classic theater fans out of your children.

Now, pardon me while I go see what’s playing in steamy-hot July and August…