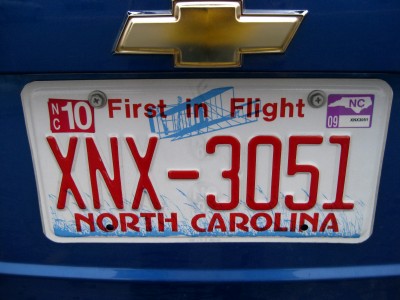 Here they are, and coincidentally both were on Chevy cars parked right next to each other in Dayton, Ohio.

You know I had to drop everything and take travel geek photos.

The plates feature taglines for two different states in two different regions of the US that both use an aviation angle to tout some “historic cred,” and perhaps encourage tourism along with state pride.

North Carolina, of course, is the home of Kitty Hawk on the Outer Banks, where the Wright Brothers conducted their famous experiments in flight around the wide-open, unpopulated sand dunes (at least, they were unpopulated way back in 1903.)

Today it’s still a nice place to visit, if a bit touristy. Plenty of lighthouses to see, although there are so many shipwrecks offshore that it’s called the “Graveyard of the Atlantic.” 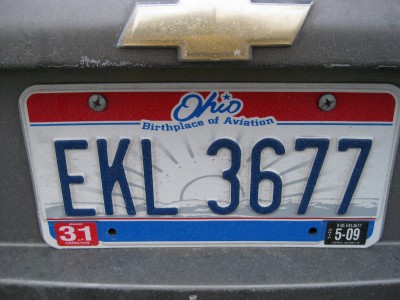 Sainted Husband and I liked the area so much, we got married there a few years back, in the tiny town of Duck at the Sanderling Inn.

Ohio, on the other hand, was actually the home of the Wright Brothers and their famous bicycle shop in Dayton.

You can visit the Dayton Aviation Heritage site, but ironically the original Wright shop was transported to Greenfield Village in Dearborn, Michigan by automotive titan Henry Ford, in an effort to preserve important historic locations.

My esteemed contacts at the Dayton Daily News tell me that the National Museum of the Air Force, at Wright-Patterson Air Force Base near Dayton, does an excellent job of telling the aviation story in that part of Ohio.

Pick your state plate – you’ll get a fun flying story either way!