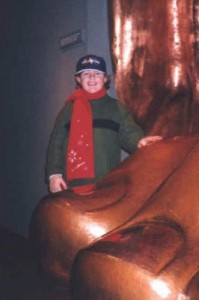 Every week until we run out of states, I plan to post about family-friendly vacation ideas, attractions and events in each one of the US states, taking input mostly from Twitter and Facebook.

Their state tourism organization is on Twitter at @I_LOVE_NY (New York City is @nycgo.) I found a New York economic development page on Facebook, but not an official state-sponsored one for travel/tourism (there are bunch of unofficial ones.) (Update – yay! – there is now an official New York State tourism Facebook Page.)

No blogs, nothing on Flickr, YouTube, etc. Frankly, I was surprised by this in such a hugely popular travel destination, but the person tweeting for New York is trying really hard, so it’s a start.

***  From the Kelly Rabideau in New York State’s tourism office (she’s currently my fave @I_LOVE_NY tweeter)  —  We came up with a few hidden gems across the State and have listed them below.  If you were looking for just one…we would have to go with The Strong National Museum of Play [in Rochester.]  It is 100% kid/family friendly….100% fun…and considered a gem to all of New York State.

Others:   Atlantis Marine World in Riverhead, the [world famous] Bronx Zoo,  Howe Caverns in Howes Cave and The Wild Center in Tupper Lake.  More travel ideas just for you right from the heart of New York State on our Web site’s Family Fun page.

***  From Janet DeVito via @girlsgetaways on Twitter  —  Madame Tussauds (the wax museum – my kids always loved that; they get a kick out of taking photos)  How about a cruise sailing out of NYC – that is a great family trip!

***  From Sally Berry via @sallykberry on Twitter  —  I was at Videotopia at Strong Museum w/my college age kids last weekend – they LOVED it!

***  From Marci Diehl (and here’s her golf blog) via @writerdiehl on Twitter  —  My 4yr old grandson loves the Seneca Park Zoo’s play “medical center” in Rochester NY.  The Erie Canal Discovery Center in Lockport NY has one of the best interactive programs for all ages +VERY kid-friendly. For the best family-friendly + educational activities/ places in New York State visit the Erie Canal area.

***  From Peggy Coonley via @PeggyCoonley on Twitter  —  Cooperstown NY is diverse and interesting for families:  https://www.thisiscooperstown.com/attractions.cfm.

***  From Meg Colombo via @FingerLakes_Meg and @VisitFingerLake on Twitter  —  NY family Friendly deals in the Finger Lakes – some search results.  My family loves to hit the Fall Foliage chair rides at Bristol Mountain [ski resort] on Twitter @Bristolmt.

***  From Dick Wilbur on Facebook —  Cooperstown is pretty much up there. Also Fort Ticonderoga, the Utica Zoo and, of course, Niagara Falls.  Oh yeah, Howe Caverns. The West End Brewery in Utica (pronounced Uticer, please) was a huge treat 30 years ago. Clinton’s Ditch (Erie Canal, named after Gov Dewitt Clinton), don’t forget most of the towns along the Finger Lakes, apples – heck the Clinton Cider Mill in Clinton, NY, all the great small colleges, the Thousand Islands. You could do a fat travel book on Upstate, hard part is to narrow it down to the best of.

You know, there are some off the beaten path places up along Lake Ontario, near Oswego. Also, Boonville, NY used to do this fun woodsman’s days competition. Also, if you go eat at Boonville and hook up with route 28, it goes from Alder Creek to Otter Lake to Minnehaha to Old Forge all the way up to Raquette Lake and beyond. Old Forge is the home of North Pole, NY, a hokey family park. And there is this fun railroad shtick on the Adirondack Scenic Railroad.

***  From Shelly Rivoli on Facebook  —  We can never get enough of the Alice in Wonderland sculpture in Central Park–climbing on it, that is. Always lots of other tots there and great photo ops. 😉 Oh, oh! Riding Metro North up the Hudson while the leaves are changing! (Okay, I’ll stop now.)

Beaver Lake Nature Center (Baldwinsville), Elbridge NY (named after Elbridge Gerry [“gerrymandering”], Syracuse basketball, lacrosse hotbed, salted potatoes, Genessee Beer, University of Rochester, Millard Fillmore boyhood home, boating, skiing, Adirondacks (THE largest park in continental US bar none – 1/6 of NY acreage!) and small towns all over the place (>80% of NY population lives within 2 hours of NYC so that leaves not a lot of people for the rest of the state.)

***  From Beth Walker Schrader on Facebook  —  Two places that would be great fun for families: Old MacDonald’s Farm outside Sackets Harbor and Fly Creek Cider Mill outside Cooperstown. I just returned from upstate NY – here’s an Autumn Lake post.

***  From Antonia Malchik on Facebook  —  I second those Ithaca recommendations. Also: Woodstock is a great town for arts, music, food, and hiking. New Paltz for food and hiking and rock climbing (Outside mag rated it one of 10 best places to live in the US). Hiking in amazing, gorgeous Minnewaska State Park near New Paltz. Come to my town of Washingtonville for access to Storm King Sculpture Park (part of the arts school), Brotherhood Winery (America’s oldest winery), Trotters horse-racing track & museum in Goshen, West Point academy, and shopping at country’s largest outlet mall Woodbury Commons.

Also great old hotels Mohonk Mountain House (near New Paltz) w/ 80 miles of hiking trails, and The Sagamore up on beautiful Lake George. Saratoga Springs, a beautiful town famous for its mineral healing waters and horse racing season. Cooperstown, home of baseball and beer-brewing (for those after-kid hours). These are all on west side of Hudson River.

On east side of Hudson, Beacon is a lovely little arts town, lots of galleries, most famous being Dia:Beacon, a world-class contemporary art gallery (Beacon’s on the Hudson train line mentioned by Shelly). Further north near Poughkeepsie there’s Hyde Park and Val-Kill, Frainklin and Eleanor Roosevelt’s respective estates, and the huge FDR museum. Hyde Park is next to the Culinary Institute of America, great for lunch. AND this weekend will see the opening of the Hudson pedestrian bridge in Poughkeepsie. An old railway bridge with a priceless view up and down the Hudson River & Valley, it was just rebuilt this last year. 6000 people will be volunteering at the opening! It’s part of a Greenway pedestrian and biking path project starting down in Manhattan.

***  From Anna Fader on Facebook  —  My best tip for families traveling to NYC would be to check out the family programs offered by many museums. They’re usually free, taught by museum educators and are a great way to experience the world-class museums of NYC. I have a list of some of the best family museum programs here: https://mommypoppins.com/ny-kids/indoor-play-and-rainy-day-activity-guide.

***  From Marilyn McCray on Facebook  —  I lived upstate for many years and I agree about the Finger Lakes. I worked at Eastman House. Lots of great cameras and photo things to see there. The Strong Museum in Rochester has a huge doll and toy collection among many other things. https://www.museumofplay.org

***  From Lucy Baker on Facebook  —  Howe Caverns!  https://www.howecaverns.com A cave so big you can ride a boat through it.

Thanks so much for the contributions!

The next state in the series is New Mexico.

Send your New Mexico highlights to @SheilaS on Twitter or write them on my Facebook Wall (please tell me you’re a 50 state-er if you want to friend me.)

Please add your own New York suggestions in the comments below, if we’ve missed anything. Thanks!