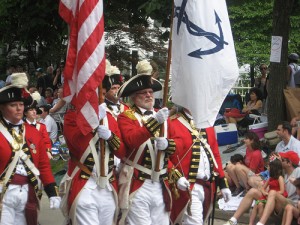 We’re going in alphabetical order but started with the end, so our first state for the series was Wyoming, then we investigated Wisconsin , West Virginia , Washington, Virginia, Vermont, Utah, Texas, Tennessee, South Dakota, South Carolina and now we’re moving on to….Rhode Island!

***  From Donna Tuttle via @WriteOnTime on Twitter  —  Proud to be identified as a RI girl. Beaver Tail Beach is amazing. Also, grab a bag of clamcakes in Narragansett and sit on the beach, watch sunset. [Try these RI foods] Coffee syrup, spinach pies, Caserta pizza, grinders, cabinets, jimmies….

***  From Meg Keough via @BackpackToBuggy on Twitter  — WaterFire https://www.waterfire.org in Providence!

***  From Mike Redbord via @redbord on Twitter  — Block Island! Particularly Mansion Beach is a great family beach. If people need lifeguards, State Beach is just down the road.

***  From Shane Donaldson via @Shane_Donaldson on Twitter  —  In downtown Newport, there are the Newport Gulls, a summer college baseball team. Fun atmosphere, low cost. https://www.newportgulls.com

***  From Eric via @NewEnglandInfo on Twitter  —  We have family-friendly RI travel suggestions at https://www.visitingnewengland.com/newengland-rhodeisland.html.

***  From Dominique King via @midwestguest on Twitter — Newport, RI also home to several old houses of worship–one of the more interesting might be Touro Synagogue = oldest synagogue in US. Taking the short synagogue tour at Touro might be interesting for an older child near bar or bat mitzvah. Gansett Cruises – harbor cruises out of Newport (https://www.gansettcruises.com) – the mid-day version includes ice cream & Del’s Frozen Lemonade….we did the sunset version ourselves-great tour and opp for lighthouse photos.

***  From Michelle Riggen-Rans via @mriggen on Twitter  — This is the best family guide to RI around: https://kidoinfo.com/ri Will be happy to provide feedback.

***  From @CheapFlightsFAM on Twitter  — WaterFire is very cool and fun for families.  Stay overnight at the Roger Williams Zoo.

***  From the state’s Massachusetts neighbors, Destination Salem MA via @DestSalem on Twitter  —  We love going to see the PawSox [minor league baseball team] in Pawtucket, and Roger Williams Zoo in Providence.

*** From Shelly Rivoli via @travelswithbaby on Twitter  —  Rhode Island: Fun train rides with the family – https://www.ocnrr.com

From Wendy Wagner on Facebook  —  Well, if you’ve lived in RI, you know that the East Bay Bike Path is wonderful. We like to start at Haines Park in Barrington, RI and bike to Colt State Park in Bristol, which is another gem. Along the way we stop by the Fruity Cow in Warren (right on the bike path), Burr’s Hill Park in Warren (a quick detour–there’s a playground and a beach there) and the Audubon Society of RI, also right off the path.

Waterfire in Providence is a spectacular event that is put on several nights between May and October. Check https://www.waterfire.org.  Slater Mill in Pawtucket is a fine textile museum. The tour guides are terrific and will tell you all about life in the 19th century.  We love the carousels at Bullocks Point Ave in Riverside and Slater Park in Pawtucket.   We also have a great Children’s Museum in Providence.

On the BootsnAll Travel Network, here are the articles tagged Rhode Island, and here is my own blog post….Small State, Big Heart: 10 Reasons to Visit Rhode Island.

Thanks so much for the contributions – the next state in the series is Pennsylvania.

Send your Pennsylvania highlights to @SheilaS on Twitter or write them on my Facebook Wall (please tell me you’re a 50 state-er if you want to friend me.)

Please add your own Rhode Island suggestions in the comments below, if we’ve missed anything. Thanks!