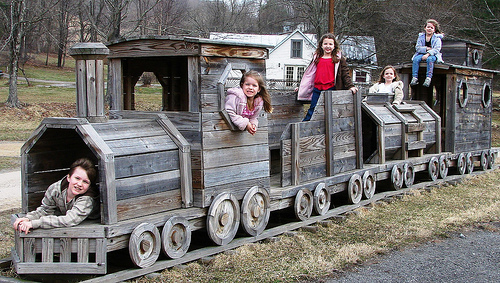 Every Tuesday until we run out of states, I plan to post about family-friendly travel ideas, attractions and events in each one of the US states, taking input mostly from Twitter and Facebook.

We’re going in alphabetical order but starting with the end, so our first state for the series was Wyoming, then we investigated Wisconsin and now we’re moving on to….West Virginia!

The state tourism office isn’t on Twitter or Facebook yet (so you West Virginia folks might want to give ‘em a nudge!)  Since their new state slogan is “Open for Business” (a branding move, basically) they should consider reaching out to possible visitors, plus their own residents, with social networking tools.

Hey, even small town and rural people are definitely on Twitter.

When I asked for input, here’s what came in (no one responded on Facebook….)

From the Elk Horn Inn (here’s their personal blog) via @ElkHornInn on Twitter  —  ATVing in southern WV; trout fishing in Elkhorn Creek; Oct. Sky Fest (in honor of the October Sky book and movie – the author was from here) in Coalwood, Pipestem Tram, trainspotting, Gary Bowling’s for music…(note from Sheila – here’s a touching video about Gary’s by West Virginia-based writer/editor/singer Douglas Imbrogno – I love discoveries!)

From Chris Bailey via @Chris_Bailey on Twitter  —  Near and dear to my heart..Stonewall Jackson Heritage Arts and Crafts Jubilee (Labor Day weekend) 2 miles from my boyhood house..must visit New River Gorge.

From Monica Benoit Beatty via @MonicaBB on Twitter  — Berkeley Springs WV fun place to swim for kids. Geo Washington’s bathtub‘s there. He was a small dude if he fit in it! (note from Sheila – when we chatted in person this past week, Monica also mentioned the Martinsburg Roundhouse Center, a B&O Railroad attraction.)

From @mechteach via Twitter  —  Canaan Valley/Blackwater Falls nice in summer/winter, many activities, lots of VRBO/HomeAway rental houses around too.

From Carla via @redyelllow on Twitter  —  Did you already get [whitewater] rafting on the Gauley or New Rivers? (got it!)

Thanks so much for the contributions – the next state in the series is Washington.

Send your highlights to @SheilaS on Twitter or my Facebook page (tell me you’re a 50 state-er if you want to friend me.)

Yes, I know how to search for family travel ideas on a destination or attraction Web site, but a tweet or Facebook recommendation is a much more engaging and public way to spread the word.

My purpose for this series is not only to highlight worthy kid-friendly vacation destinations in all 50 states, but by using Twitter and Facebook to also encourage tourism organizations to learn more about connecting with their visitors using social media and online networks.

Please add your own West Virginia suggestions in the comments below, if we’ve missed anything. Thanks!