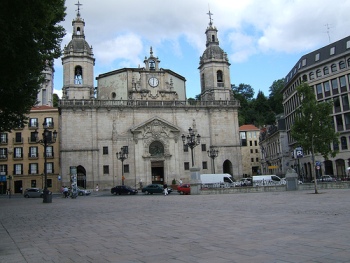 Bilbao doesn’t exactly strike anyone as a family friendly travel destination. Situated on the banks of the river Nervión and with a mild climate, the city is an excellent choice for families with children old enough to explore museums. The rainy climate makes it difficult cu plan a day at the beach, but it’s heaven for those who like lush, green nature and want to plan hikes on the near-by hills.

Bilbao is served by an airport and, as you know, finding cheap flights to Spain is not hard . Large airlines such as Lufthansa, Spanair, Air France, Air Berlin and Iberia serve the city; but you can also grab low-cost airfare from airlines such as Vueling, easyJet or Air Europa.

After you’ve booked the flight, make sure to look for cheap Bilbao hotels before you leave. Depending on what facilities you look for, rooms range between €19 and €30 per night in cheap hotels. But when you travel with the kids you might also look into renting a vacation apartment for the duration of your stay.

As for the things to do in Bilbao , the kids will definitely have a lot to learn when visiting the museums and exploring the Old Town. The Guggenheim Museum is an art work itself and houses permanent and visiting exhibits of works by Spanish and international artists. Then you can explore Mercado de la Ribera, one of the biggest covered markets in Europe, and try some of the local food. If you happen to visit Bilbao during the summer, you can attend an open air concert at the Kiosko del Arenal.