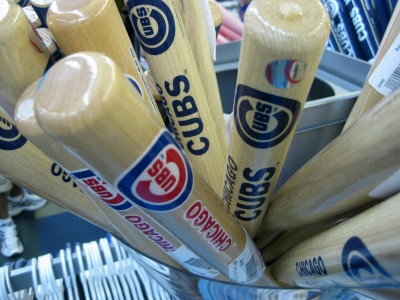 It’s no secret that a game at a major league ballpark is not necessarily a cheap outing with the kids (even before the nagging requests for nachos, drinks and T-shirts, plus parking costs if you drive.)

I was a Wrigley Field Bleacher Bum at a Cubs game in Chicago (thanks to my friends Pat and Ben from Matterhorn Marketing, who sprung for my ticket while we’re here for SOBCon.  Hey, it’s usually $25 whole dollars to be a Bum!)

The deal with bleacher tickets is that you don’t have assigned seating;  it’s first-come-first-served, and you may not get a seat at all, but you DO get to hang out with rapid Chicago Cubs fans and enjoy historic baseball atmosphere at an affordable price.

Wrigley was built in 1914; the only major league stadium that’s older is Boston’s Fenway.

Now, if you have kids, you’re going to get there early and get some seats unless your children are very tall and can see over the standing grown-ups, or you plan to do the toddler-on-the-shoulders thing.

I’ll also tell you that the fan language gets pretty strong as the game wears on and the beer consumption increases. Buyer beware.

Still, I think it is well worth the experience to see a Cubs game at historic Wrigley. Do take the CTA (Chicago Transit Authority) Red Line to the game – parking costs nearby are astronomical.