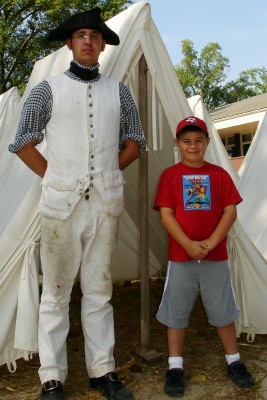 I’m going a little bit out of order here as I post about our family trip to Virginia; after my Historic Jamestowne write-up I was going to cover the living history museum at Jamestown Settlement, but decided to cover Yorktown next.

Now that we’re back home in Texas, I have a little more time to catch up on my blogging before my daughter and I turn right around and leave next week for our road trip to Chicago, where I’m speaking at the BlogHer blogging conference. Yes, it IS a good thing that I drink a lot of coffee!

Yorktown is set up much like Jamestown; you get a two-fer. There are the original sites, administered by the National Park Service, and then “living history museums” where reenactors and recreated places give visitors the flavor of the 1600s (Jamestown) or 1700s (Yorktown.)

It seems silly and duplicative at first, but when you see the original sites such as Yorktown Battlefield and Historic Jamestowne, it begins to make sense to put the larger museum buildings and re-created spots a slight distance from the historic parks because of space constraints and the need to protect the original areas and allow ongoing archaeological work to continue relatively undisturbed.

At Yorktown, we visited the Yorktown Victory Center, which includes a re-created Colonial Army encampment, a post-Revolution 1780s working farm and an extensive museum with galleries and a film. Our time was fairly limited, and even though I’m a terribly geeky plaque-reader who willingly reads every word of every plaque if there’s time, we had to move along quickly.

Visitors initially pass through the gift shop/tickets/Welcome building (horsewhipping children away from buying stuff and reminding everyone to go to the bathroom) and follow a pathway that lays out the timeline of events building up to the American Revolution.

For my international readers, the bottom line is that Colonial Americans did not like paying taxes without having some say in how they’d be taxed, what would be taxed and the amount, particularly when it came to their tea (hence, the 1773 Boston Tea Party when they dumped three hundred chests of tea into Boston Harbor to show their pique.) Many Colonials certainly considered themselves good British citizens until they felt that they were treated as second-class persons, then they got their pantaloons in a twist. 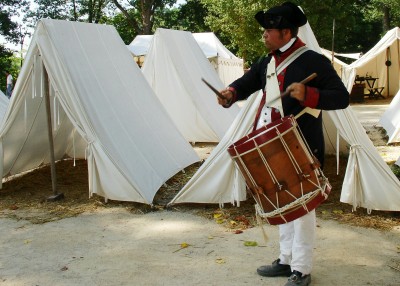 My seven year-old son actually paid more attention than I expected to the Yorktown Victory Center’s many displays, dioramas and “Witnesses to Revolution,” which were audio recordings made from original documents of those who lived in the times.

My teenage daughter also enjoyed the Center, but she felt that the featured short documentary film A Time of Revolution was a rather dry presentation of “a bunch of people talking” about their feelings and impressions of the Revolution.

The impressive museum galleries just went on and on, with a wealth of information about the course of the Revolutionary War and the events and converging of armies that led to Yorktown and the American victory (with considerable French help via Lafayette) over the British General Cornwallis.

I tried to give my son the ten-second summary — it’s a miracle that we won the Revolutionary War. George Washington fought an excellent insurgency with limited resources against a powerful, better-equipped foe. He didn’t have many outright victories, and he withdrew often to “fight another day.” His insurgency is taught at our nation’s graduate-level military War Colleges; I spent a week studying it while a student at the US Naval War College in Newport RI.

Since we won against a great power, Britain, using a well-executed insurgency, you’d think as a nation that we’d understand such warfare a little better than we do, and we’d understand that massive firepower and manpower do not always mean victory. I hope this lesson at least got through to my kids. 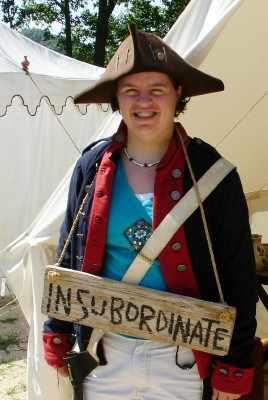 The Colonial Army encampment at Yorktown Victory Center had numerous costumed historical interpreters and a small “tent city” with reproductions of period furnishings and accoutrements.

Interpreters did an excellent job of interacting with visitors, conducting musketry demonstrations, describing 1700s battlefield and dental surgery (one word — ick!) and showing how the soldiers were trained to fight.

We had less time on the working farm, but it was nicely laid out to show the crops, outbuildings, farm animals and challenges of small farmers, again with costumed and exceptionally knowledgeable interpreters. The assorted chickens and other farm fowl running around were a big hit.

I really like the living history concept, because it is so difficult to get kids engaged in the past unless you can engage their imaginations, which is hard to do in the standard museum setting.

Spend some time in Yorktown, and your children may actually pay attention in their school’s American History classes.