Ground Control to All the Kids: Cool NASA sites to visit 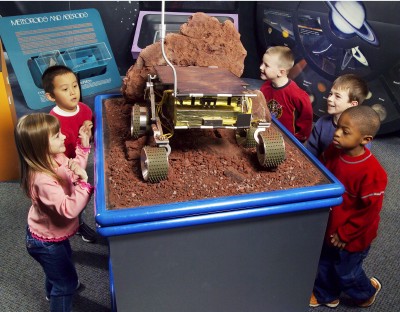 The space program has taken a few lumps and seen some rough times in recent years, but the magic and excitement of reaching beyond our planet still draws our eyes upwards to the heavens.

I just had an article published on education.com about exploring family-friendly NASA sites across the US.

I hope to show parents that their young ones can learn about space operations someplace besides the famous Kennedy Space Center in Florida.

One neat facility that we didn’t have quite enough room were able to include is in Cleveland, Ohio….the Glenn Research Center.

Special events every third Saturday of the month give unique insights into topics like the Constellation program to return humans to the moon, the Phoenix mission to Mars and the Hubble telescope.

By the way, NASA has lots of podcasts, videos and blogs, including Shana’s Blog by Deputy Administrator Shana Dale, and NASA EDGE (where “hosts Chris and Blair offer an offbeat look behind the NASA curtain.”)

The initial rush of excitement about going to the moon is almost forty years old; today’s children will push beyond our solar system, and visiting a NASA facility can inspire their dreams.