How to take your first road trip with a newborn baby 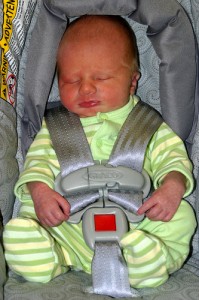 I’m thrilled to report that Sean Keener, the CEO of BootsnAll (the travel network that hosts this blog) and his wife just welcomed their new son Kai into the world.

Here’s his announcement tweet about it, which of course made me bawl.

They’ll probably be thinking about taking at least a short trip soon, because boots are made for….well, you know….

When my daughter was born, I could not WAIT to get out of the house after a couple of weeks. Part of the urge was to prove to myself that motherhood wasn’t going to mean the end of travel until the kid was older, and part of the urge was to do something besides baby care plus trying to figure out how to shower and sleep occasionally.

I also wanted to see if I could nurse a baby while traveling (answer = oh yes.)

When our new baby was three weeks old, we drove from the Washington DC metro area to New York.  My Mom was rather aghast that we would venture out so soon (not done in her day) but I itched to pack my suitcase.

Here is what I learned about road trips with newborns:

We still talk about the epic trip to New York to this day, although that daughter of mine will head to college this fall.  We learned that we could still travel, the baby was fairly adaptable, and if we scaled way back on expectations, we could have a really nice time and get a break from routine.

Did I miss any newborn road trip travel tips? Let us know in the comments!