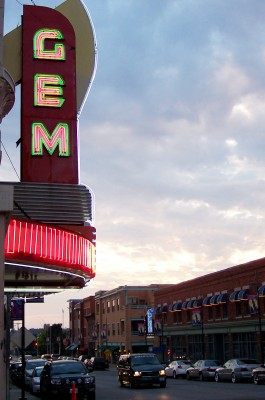 It’s always a pleasure to find a likable city that I previously knew nothing about. Kansas City is a gem.

Big enough for visitors to feel that bustling urban energy, yet small enough to be accessible for families, I think KC would be a great place to live as well. There’s a good cross-section of activities and interests, and the parks and fountains everywhere really add to the ambiance.

There are good itinerary suggestions here for the KC novice.

My teen and I visited two popular sections of town in the afternoon and evening. First up was the Country Club Plaza shopping area; the name is a little misleading because the architecture and art are Spanish/European and the colorful 15-block section was built in the 1920’s when that part of the city was “the country.” Many of the stores and restaurants are upscale chains that you can find elsewhere, but there are local spots, too. It’s very pretty and walkable, with free parking.

We were hungry as the evening wore on, so when the restaurant waits were too overwhelming at the Plaza, we drove to the historic 18th and Vine district for a fabulous Southern cuisine dinner (“Soul Food with Elegance”) at the Peachtree Restaurant. We still had to wait a little, but it was worth it. I had some terrific catfish with black-eyed peas and collard greens, and my teenager had the meatloaf. The sweet potato rolls were divine. We were a little underdressed since we hadn’t planned on ending up there, but the staff made us feel most welcome.

The soft live jazz during dinner made up for not having time to take in the show at the nearby Blue Room, which is attached to the American Jazz Museum. Minors are allowed with an adult, so it’s a good venue to take older kids to hear live jazz performances.

The Negro Leagues Baseball Museum is also right up the street in this historically black section of town. Anyone who likes baseball should pay a visit to this tribute to players who had “a league of their own” until baseball was finally integrated when Jackie Robinson was recruited from the Kansas City Monarchs to play for the Brooklyn Dodgers. The Negro Leagues actually lasted until the 1960s before they folded.

The next day, we spent a lot of time at the huge National World War One Museum, a highlight of Kansas City that opened in December 2006. Most Americans know little about WWI since we weren’t involved on a large scale for very long, but I had a grandfather who served aboard the USS VERMONT and a great-uncle who was gassed in France, so I’ve long had a personal interest.

You may wonder; why is this place in Kansas City?

The museum docent that I talked to felt that because the big Liberty Memorial was built in 1924, there has long been a tangible monument here specifically to commemorate the Great War. They’ve always collected WWI documents and artifacts, so opening the Museum was a logical next step. The focus is not just Americans in the War, but the War as a whole. It’s very comprehensive. 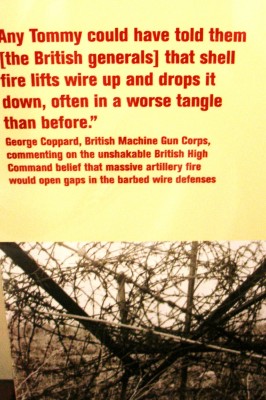 There are excellent videos, dioramas and displays, even little “Reflection Rooms” where you can sit and listen to selections of WWI-era music, poems, prose and personal histories.

In school, most kids only learn that the War started because of some mess in the Balkans, and they have to memorize a tangle of alliances that they don’t care about, so I strongly recommend this Museum to make this turning point in history come alive for them.

I’d love to return to Kansas City someday; it was a pleasure to visit.

Just remember that there’s a Kansas City, Kansas and a Kansas City, Missouri right next to each other, so check Web sites to see which side you’re going to.