Kansas Underground Salt Museum: the tornadoes can’t get you here 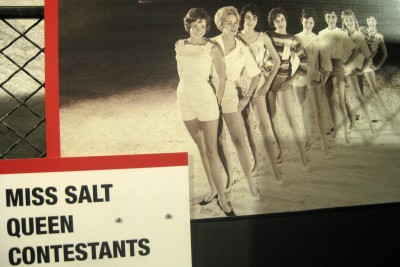 You won’t believe what’s going on 650 feet underneath those Kansas wheat fields (about the height of the Gateway Arch in St. Louis from top to bottom.)

It only takes 70 seconds going straight down an elevator shaft to see one of the 8 Wonders of Kansas.

A working salt mine  —  although museum visitors are not anywhere near any blasting or ongoing work.

And Batman costumes  —  because at a constant 68 degrees and 45% relative humidity in 325 feet of solid salt, the already-mined sections are a perfect home for the Underground Vaults and Storage company’s long-term records and artifact storage, including a bizarre variety of Hollywood’s goodies and film masters.

Salt Museum visitors can take a guided tram ride around the maze of mine shafts that are now a museum for one of the biggest industries in this part of Kansas;  the mining of rock salt.

Wearing the required cool hard hats is merely a bonus for kids.

I liked the mining history stories, the sense of expansiveness as the tram drove around (the excavated area is massive) and even the pitch blackness and total silence when our guide turned off the lights for a moment, to give us a chance to pretend to be moles far below the prairie.

Check them out if you’re in the area (advance reservations are highly recommended) or visit them virtually on their museum Facebook page, on Twitter @650feetDown, on the KUSM YouTube channel and on their MySpace page.

(The video below, from the souvenir rock salt pile, was shot during a blogger’s press/familiarization trip courtesy of the Hutchinson Convention and Visitor’s Bureau.  My museum admission fee was paid as a part of the trip.)

Here is the URL link directly to the video, in case you can’t see it below.