Time for a quick update from the European city that Americans love to visit….London.

We went several times and really enjoyed ourselves, but you need to watch your budget. It’s tough enough for a family to deal with plane tickets, crummy exchange rates and the high cost of urban hotels, but everything in London seems to cost a fortune.

Tips for cutting costs usually include things like eating at a lot of Indian/curry joints. Now, I adore Indian food, but I’m willing to bet that a lot of American kids haven’t exactly been snarfing down the chicken tikka masala or prawn curry on a regular basis. So here’s my suggestion before you go to London — take the kids to your local Indian restaurant and help them find dishes that they like, and you’ll be all set for squeezing those food costs in Britain.

Fodor’s has a good Travel Wire overview article on London, including sights, dining and lodging and their list of 10 free things to do, plus five more inexpensive options. 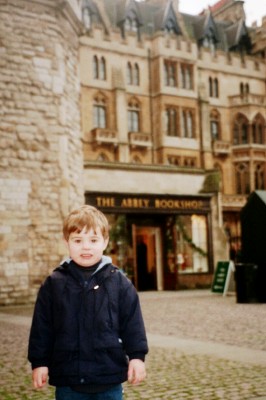 Lodging is always a big chunk of the budget, and Britain is starting to develop chain hotel options that can help. Here’s the info from the UK’s Times Online. I’d love to always stay at a cozy, charming B&B that welcomes kids, but it’s hard to tell what you’re getting from across the Atlantic.

Sometimes a chain works best; there are names like Ibis in Europe that are good for families but not well known by Americans.

For discount prices to a variety of city attractions like museums, you often can’t beat city passes. The UK’s Telegraph gives links to sites that sell such passes for London and also Edinburgh, Liverpool and York.

There is a Travelcard pass for the Tube (the Underground, or subway) and bus service; we used this and it was so nice to just flash the pass and not have to fumble around for change, especially with wiggly kids.

Take a look at the London Tourist Board’s Web site for family fun in the city, and I also like the layout of the LondonTown site, which has a pdf download right now for “what’s on” for the 2006 Christmas/holiday season. Time Out London always has loads of info about what’s going on in the city.

Update 27 March 2007: There are some gorgeous Will van Overbeek photos of London sights on this National Geographic Traveler blog post. I also like this video, 24 Hours in London, from the concierge.com Web site.