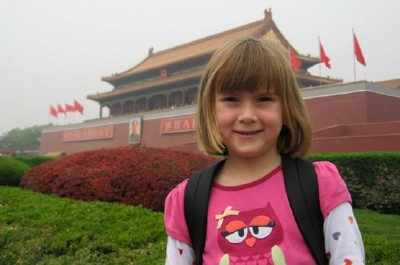 (This is Part Two of a two-part series by guest poster Laura Bond Williams, about taking kids to China. Click here for Part One, with lots of tips on long-haul air travel with children. Thank you SO much for this, Laura!)

We played hackey sack at the Temple of Heaven and hustled away from adoring crowds at Tiananmen Square.

We motored by Beijing’s National Stadium (dubbed the Birds’ Nest,) paddled boats on Lake Kunming at the Summer Palace and hiked the Great Wall. 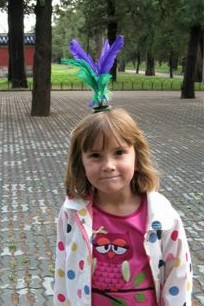 While we planned our trip, friends often asked, “Why China?” (roughly translated: “If you’re spending $4,000 on airfare and visas, shouldn’t you end up by a pool with a swim-up bar?”)

I realized that I’d hear that question for years, and it reveals both anxieties and curiosities about international travel generally — and specifically, about traveling with children.

People familiar with China worried about environmental and other health hazards including public toilets, Asia’s notorious “squatty potties”. Other friends were concerned about food (because kids are reputed to be picky,) homesickness and entertainment. How would we keep the kids amused?

Anxieties: yes, I had them all. But the bottom line is that there is plenty for kids to do, see and eat in Beijing. And we found a great solution for squatty-potty fears. 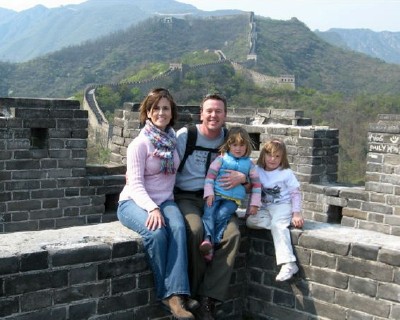 Our trip to China was motivated by my childhood friend who moved to Beijing last year with her family. When she and her husband began preparing for their expatriate life together, I said that we would visit them anywhere as long as we didn’t need a dozen vaccinations or bodyguards. When she announced that they were headed to Beijing, I said, “We’ll come.”

So, while preparing for this opportunity of a lifetime, we were both practical and pragmatic.

Here’s my one practical tip to allay health fears: if you choose vaccinations for your children, make sure they are up-to-date with current requirements. My husband and I chose to have Hepatitis A vaccinations. The Centers for Disease Control Web site has more information. We didn’t drink tap water on the advice of our friends; they have bottled water at home. We bought bottled water at the store while out and about. Done.

About squat toilets; yes, they are a little intimidating. They have a fearsome reputation among women travelers and expats because of the likelihood of peeing all over yourself if you’re not positioned just right. (My kids also figured that out — fast.)

So here’s the good news: when the Chinese government began preparing Beijing for the summer 2008 Olympic Games, they put a high priority on improving public toilets. There are 1 or 2 “Western-style” toilets in nearly every public restroom. (The public restrooms near Tiananmen Square are pristine.) There, Chinese attendants saw our non-Chinese faces and politely guided us to the right stalls. You can buy some cheap souvenirs upon exiting the toilets (really.) 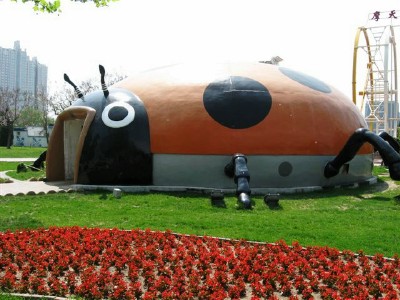 But in restaurants and in public spaces like Ritan Park, Houhai and Chaoyang Park, nearly all potties are “squatties.”

Enter a wondrous creation, the portable toilet. My husband carried it in his backpack, and voila, my kids could squat contentedly. We even placed it over squatty toilets a few times and didn’t use plastic bags. Done.

If you solve for those minor anxieties, the opportunities to enjoy Beijing with your kids are everywhere. You’ll find yourself:

** Jostling along in rickshaws around Houhai, riding the rides and walking the great rocks at Ritan Park.

** Posing for photos in front of the Gate of Heavenly Peace and Tiananmen Square. 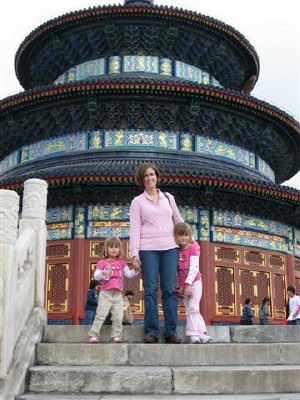 ** Shopping the stalls at Hongqiao Market, where I haggled on the price of pashminas and eager sellers dangled Hello Kitty watches at my daughters.

** Peering into the Hall of Prayer for Good Harvests and seeing a 4-minute friendship bloom with a sweet-faced Chinese girl at the Temple of Heaven.

** Hiking more than a mile on the Great Wall at Mutianyu, their little legs pausing to rest at the guard stations.

These brown-eyed, blonde girls were minor tourist attractions nearly everywhere they went. Nai-nais (grandmothers) and college students wanted to sweep them into their arms. (My friend calls this awkward celebrity status the “Brangelina effect.”)

There’re not a lot of 3-feet-tall, pink-skinned children in China.

Truthfully, the adoration was not always welcomed; my 3-year-old began burying her face in her hands when a stranger approached and a camera came out. We politely declined a lot of requests to photograph and hold our children. Even when we felt a bit hassled, I was touched by how Chinese people simply adored having children around them. 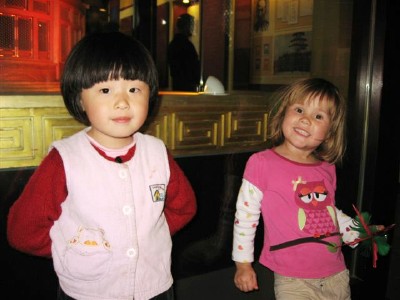 That memory is a sweet souvenir, which brings me to Reasons No. 2 and 3 why we wanted to go to China….

We missed our first opportunity to go to Asia 8 years ago.

My brother-in-law and sister-in-law lived in Okinawa, Japan for more than 2 years.

We did not visit.

One of the most spectacular human beings I ever knew was an American expat raised in Singapore, Taiwan and Hong Kong. His name was Scott Seator, and when we became friends in college, I never tired of asking him about his life growing up overseas. He shared with me a great love of and fascination with Asia. He had a head full of memories and anecdotes (of southeast Asia and many other subjects, like baseball and Stan Musial.) 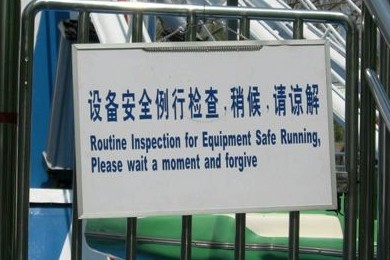 He opened up my world by simply being one of the kindest, most interesting and talkative people I ever met. Over the years I longed for the opportunity to see Asia through my own American eyes, and that yearning was a gift from him.

Though my children’s memories of China may fade, I believe that my husband and I gave them something else: a story and a seed.

My youngest may protest one day that she doesn’t remember the Great Wall.

My oldest may have watery recollections of the indoor ball pit and playground in Shunyi (her favorite places.) 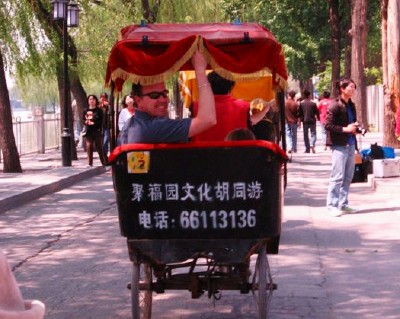 Here’s my goal: as long as we keep talking about it, the trip becomes part of their “when-I-was-growing-up” story.

Yesterday my 5-year-old came to me with a small tin of candy from Jenny Lou’s grocery.

“Mommy,” she said, as she passed through the kitchen, “When we go back to China, can we get some more of these?”