One night in Cowtown: Fort Worth 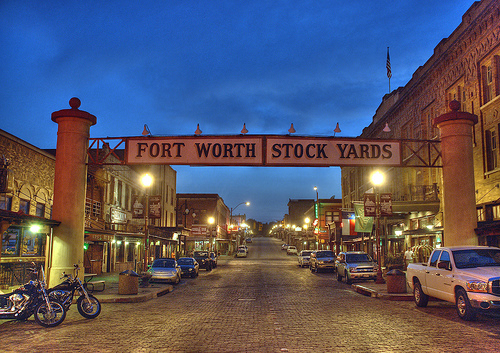 Well, with me running around trying to do too much, we didn’t get on the road for the Great Midwest Road Trip until late in the day yesterday.

The drive up Interstate 35 from Austin to Fort Worth was the usual freeway fare; dull but fast. Our main objective last night was to walk through the historic Fort Worth Stockyards area and have a steak dinner, and we fell into bed last night after accomplishing both.

The Cattlemen’s Steakhouse has been serving up the sirloin since 1947, and last night my teenager and I wolfed down a NY strip and “Heart o’ Texas” ribeye between the two of us (with a Shiner Bock on draft for me, of course.)

They were incredibly tender and juicy, although my daughter struggled a little with her newly-installed braces. Just don’t look into the gaping, chewing mouth. 🙂

I recommend our hotel, the AmeriSuites, which is well-located in the Stockyards and quite comfortable, although currently under renovation to become a “Hyatt Place.”

There are some fun shops and saloons, but we’ll have to come back someday to see the daily (11:30 a.m. and 4:00 p.m.) small herd of Longhorn cattle that they run down the middle of the Stockyards main drag. Sure, it’s touristy, but I want to see it sometime.

We actually “met” the herd last night while walking around the district; the Longhorns were hanging out behind the building where the weekend rodeo and Wild West Show are staged, so we went up to the fence and said hello. I don’t think I’ve ever been that close to a Longhorn — they really are pretty impressive.

On weekends, there is a year-round rodeo, and a short version of Pawnee Bill’s Wild West Show. For an Annie Oakley fan like me, that would be great!

Now we need to get on the road for Oklahoma. After crossing the Red River and a stop at the Chisholm Trail Heritage Museum in Duncan, we’ll take part of old Route 66 from Oklahoma City to Tulsa, then up to Osage Hills State Park, where we’ll stay in small cabins built during the Depression by the Civilian Conservation Corps.