Paris….And I’m NOT Posting Because of “The Da Vinci Code.” 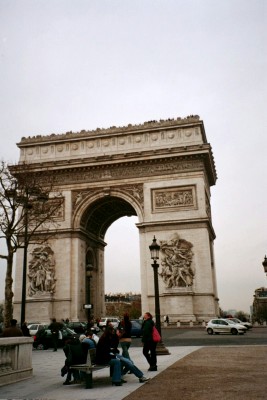 Now look, really, I just had some good Paris info links piling up and it seemed a shame to let all of that guidance go to waste.

The fact that every media outlet under the sun is running around looking at the shark-jumped “Da Vinci Code” movie and book locations is irrelevant to my blog’s editorial timing. I would never do something so cheesy as to time a post to a currently popular topic….or point out that one of my most popular posts is “Paris with Kids: The Louvre.”

Oh well, if you’re thinking about a trip to the City of Light, for whatever reason, here are some helpful tips I’ve collected:

** All right, all right, it’s a family gig, so here’s the Washington Post’s “Paris with Kids,” a very useful compendium of ideas and tips. The most important one is to see the Eiffel Tower at night (or “Eyfee Towee” as my son called it. Awww.)

I also recommend, as the author does, a stop at Laduree for the fluffy-crunchy-light macaroon cookies. She and her son tried the pistachio and rose ones; so did we and they were great. Also a good sneaky way to teach children’s finicky palates to try new things. ** Where to sleep? The UK’s Telegraph gives you Paris lodging options.

** How about those eats? A Parisian local gives it up for Budget Travel readers; all of her favorite markets, restaurants, bistros and food halls. While we’re at it, here are some bistro behavior tips so you won’t be surprised and offended that the waiters really are sometimes a bit snotty (but harmless.)

As a family we found Paris quite accessible, even with my abysmal French, and not as absurdly pricey as London. People were friendly and helpful, and even when waiters ignored us we had almost expected it anyway. I don’t want to tar them all with the same brush; many were chipper and brought our food quickly and with a smile.

No matter what, French hot chocolate and croissants for breakfast can’t be beat.

Update 8 October 2006: Here’s a nice piece in the San Antonio Express-News about travel to Paris with a 12-year-old.

Update 23 January 2007: From the travel section of the UK’s Guardian Unlimited, some more lodging ideas (I’ve seen many of these same hotels pop up in “Secret Hotels of Paris” sorts of articles.) Don’t focus on the price so much as the location and atmosphere, because with kids in tow you’ll pay more to get a big-enough room.