Photo of the Week: Colmar, France 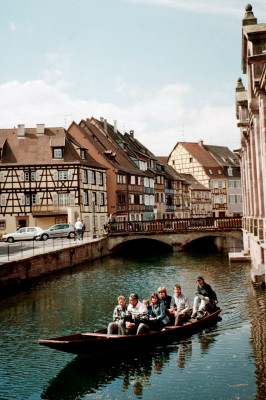 This photo was taken in Colmar, a lovely town in the gastronomically-delightful Alsace-Lorraine region in France, near the German border.

This was the section of France that Hitler grabbed just before World War Two, arguing that it was really German, not French, and that the Treaty of Versailles had unfairly given it to France as a war reparation.

Yes, my daughter could not have been more disinterested in hearing an impromptu history lesson as we walked around, but she got over it. 🙂

Colmar is full of charming half-timbered buildings and it’s quite walkable with kids. Just over the border in Germany (in the town of Rust) is the terrific EuropaPark, a spotless amusement park with thrill rides and little mini-countries (like Walt Disney World’s Epcot in Florida.)