Photo of the Week: Where Harry (sort of) Met Sally 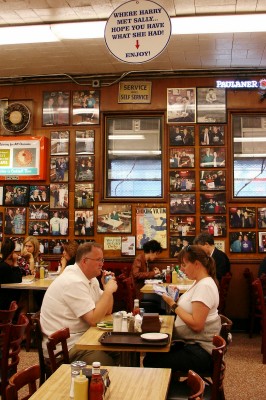 Remember that scene in the movie When Harry Met Sally, when Sally, er, rather vocally shows Harry how to fake the “throes of passion,” and a guy a woman sitting near them (director Rob Reiner’s mother in real life – and thanks to my commenter Susan for correcting me) sitting near them sees her display and says to the waiter, “I’ll have what she’s having?”

That scene was filmed at the venerable Katz’s Delicatessen, on the Lower East Side in New York City.

Since my husband and I consider that “our movie” (we were married the year it was released) I made a beeline to Katz’s when I was in New York for Condé Nast Traveler, and I took a picture of the famous table where the characters were sitting.

I didn’t eat anything there, but did take a look at the menu and was pretty tempted.

, said the sandwiches were to die for.

That day, though, a sentimental journey was filling enough for me.