Riding the Chisholm Trail in Oklahoma 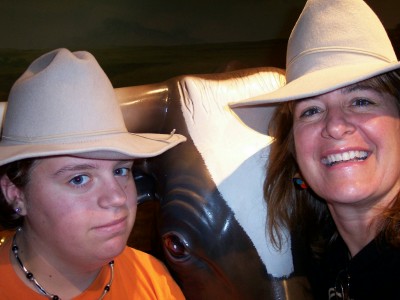 We’re still in cattle-driving mode, heading north from Fort Worth into Oklahoma on Highway 81, also known as the Chisholm Trail Highway because it roughly follows the route taken by thousands of head of cattle from south Texas to Abilene between 1867 and 1880.

After crossing the swirling Red River on the Texas-Oklahoma border, we drove to Duncan OK and the Chisholm Trail Heritage Center for an in-depth look at the Trail and its role in creating the American cowboy mystique that lives on today.

The Heritage Center is not very big but is nicely done; there is a room with plenty of buttons to push and interactive exhibits for kids, a Western art gallery and a really great multimedia film that makes the audience truly experience the Trail (stampeding cattle and all!)

I asked a passing museum official a question about the remuda, or group of spare drover/wrangler horses that accomplanied a cattle drive, and the man I asked happened to be Bill Benson, the enthusiastic Executive Director of the Center.

He was kind enough to give us some more historical background and detailed current information; did you know that there are still cattle rustlers today? Some cowboy-owners drive trucks to check and feed their herd, so the animals are used to coming to eat when a horn is honked or metal bucket rattled.

Guess what — the rustlers just do the same thing (honk or rattle) and when the cattle come running the docile bovines are loaded onto big trailers or trucks and taken away.

There’s a special section of Texas Rangers who do nothing but try to track down stolen livestock.

It certainly gave me and my daughter a clearer view of the sheer distance involved, especially when you aren’t getting from TX to Abilene in a 60-70 mph car (the pathway was patterned after a scale model of the Mississippi River on Mud Island in Memphis, Tennessee.)

We spent more time than we’d intended in Duncan, but it was worth it to linger and learn more about the history of the Wild West.