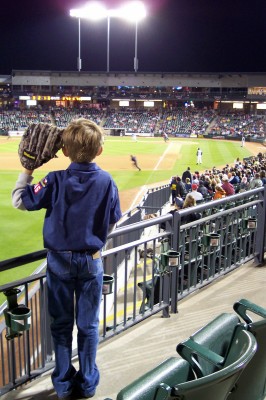 Although I’m not a huge baseball fan, I’m all for taking the kids to a baseball game, especially if it’s one of the minor league teams all across the US.

As long as you can avoid the midday sun with shaded seating, or go to an evening game, it’s hard to beat for the price and it makes for an All-American family night out, with amusements for everyone.

When we travel, I look to see if there’s a local minor league team playing, because it’s a great way to get the flavor and atmosphere of a town, and the audience includes all ages and all attention spans.

The Pawtucket Red Sox, for example, are part of the Boston Red Sox organization, but they’re also the pride of tiny Pawtucket, Rhode Island, close to where my son was born.

Montgomery, Alabama has the Montgomery Biscuits; the mascot has a pat of butter for a tongue. What’s more Southern than biscuits?

Here in the Austin area, we have the Round Rock Express baseball team at the Dell Diamond (yes, that Dell – the company is based in Round Rock, about fifteen minutes north of the city of Austin, where Michael Dell attended the University of Texas.)

The Express is a Class AAA affiliate of the Houston Astros organization and a popular diversion in central Texas, averaging 9,000 attendees per game for eight years running.  Famous pitcher Nolan Ryan is part owner of this team plus another down in seaside Corpus Christi. 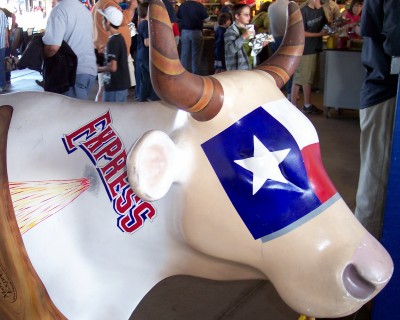 As in most small ballparks, the atmosphere at Dell Diamond is decidedly local – it’s Texas, so there’s plenty of Blue Bell ice cream, BBQ, Dr Pepper, Whataburger and Shiner beer.

One billboard features the Nyle Maxwell auto dealership; he was also the mayor until very recently.

Another billboard is for Hill Country Staffing; “Your on- and off-shore hiring experts in the oil and gas industry.” KLBJ radio advertises itself as the “Rock of Austin;” President Lyndon Baines Johnson (LBJ) was born and raised in central Texas.  Bakery company Mrs. Baird’s sponsors the popular Monday night $1 hot dog/$1 drink event (presumably the bun portion.)

Paying attention to the action on the field is secondary for many in the ballpark.

Teenagers hang out on the grassy berm; “We don’t actually watch the game,” says my teen daughter – the point is to pay a minimal amount to get into the cheap seats, then visit with friends. There’s also a kid’s play section with basketball hoops, a rock climbing wall and bungee-trampoline contraption.

There’s always something to see.

***  A pause in the game brings us kids dressed in giant red felt claws, slippers and a hat with crab eyes from Joe’s Crab Shack to do some sort of crustacean “cash grab.”

***  Whenever a ball is hit out of the park, the PA system plays a variety of amusing sounds related to what the ball might hit – we hear a cow moo, the (recorded) sound of glass breaking and baaa’s from supposedly perplexed ball-bonked sheep.

***  The “Home Run Porch” area above one of the berms has actual porch rockers to sit in. First come, first served.

***  Different action on the field warrants certain snippets of songs to be played over the PA – if a player swings and misses, he might get “They Call Me the Breeze.”  When the team’s just barely hanging on against an opponent, the audience hears “Stayin’ Alive.” A ball that blows past a batter cues up “Blue Bayou.” A conference on the mound results in “The More We Get Together.” Each Express team member has a song when they come to bat – pitcher Josh Muecke gets the (rapidly annoying) “Oh Mickey, You’re So Fine.” 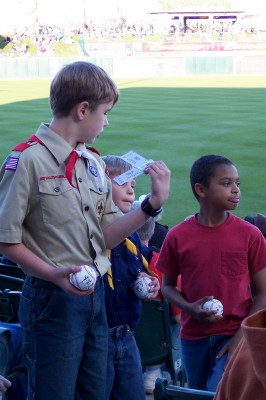 The Dell Diamond is just across the road from a major railway freight line, so loud and lonely “woo-woo” train whistles occasionally cut through the crowd roar.

Those trains used to haul a lot of cotton, because before this was a snazzy modern ballpark full of cheering suburbanites, it was just a bunch of cotton fields, out in the middle of nowhere.

For bonus fun during the rest of July and the month of August, see if the traveling Family Funfest three-hour free baseball celebration is scheduled for your ballpark.

Check your local minor league ballpark for an enjoyable family outing, and if you can drop in on a game in another city during a visit, by all means do so.

What’s your favorite minor league ballpark, at home or away?