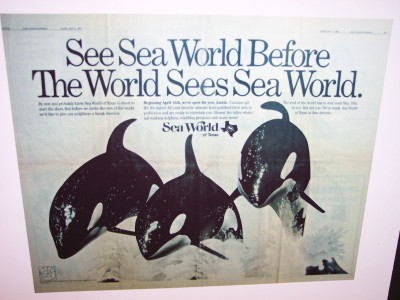 The aquatically-themed SeaWorld San Antonio opened its doors in April 1988, and in April 2008 my son and I had a special invitation to visit the park and enjoy some of the 20th anniversary celebrations.

We joined the behind-the-scenes corporate celebration; a luncheon during which previous park managers were brought back to share stories with current employees (there have been more than 36 million park visitors since the 1988 opening day, so there were lots of stories.)

Having an eight-year-old boy sit still for that was a bit of a challenge, but he was happily distracted by the special 4,000 pound black and white custom Shamu cake made just for the occasion — “one whale of a cake.”

The baking and decorating effort was spearheaded by SeaWorld pastry chef David Rodriguez and took 10 gallons of vegetable oil, 800 egg yolks and nine hours to apply all of the black and white icing over the chocolate/buttercream/brownie cake combo.

One of the SeaWorld sea lions, Clyde, also made a short appearance at the corporate luncheon, so my son (aka Mr. Wiggles) had plenty of good distractions between cake and Clyde. 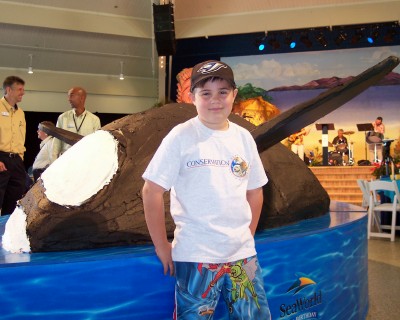 Once the adult activities were over, we enjoyed the rest of the day going on get-wet rides like Rio Loco and Texas Splashdown. I love rollercoasters, so was ready for the Journey to Atlantis and Steel Eel, but my son declared “no way!” Sure; just a few more years and he’ll be like his sister, going on the scariest rides first thing and then doing them over and over.

Our favorite up-close animal interaction was with the penguins. Visitors to the Penguin Encounter can get on a moving sidewalk and look through the glass walls at the cavorting penguins swimming underwater and waddling around their habitat. There is a raised platform where you can also just sit and watch, but no, we rode the sidewalk about 5 times.

Make time for the animal encounters with trainers and the feeding times, so the kids can learn more about their favorite sharks, sea lions, birds, etc. You can pick up a schedule of these events when you enter the park.

We wrapped up the day with Shamu at the “Believe” show. As you can see at the end of the short video below, I moved way back and up in the stands for the whale-tail-splash event, but Mr. Wiggles commandeered a front-row seat and got himself totally drenched. The orcas were truly spectacular; even though part of me squirms a bit when it comes to trained animals for human enjoyment, I could not deny being grateful for a chance to see a killer whale up close.

Someday maybe we can see them in the wild.

The park had a huge playscape area for younger kids, with a Shamu Express kiddie ride and a restaurant nearby overlooking a small harbor (where there’s also a waterski show several times a day.)

To the left of the main entrance is a small water park, so you could combine rides, animals and a water park in one visit. For more info, here’s an interactive park map. Wherever it says “prepare to be soaked,” believe it. There are lockers to stow your gear, or bring a waterproof camera, pack and/or rain parka.

Ask about AAA and military discounts for park admission and vacation packages. If you live close by and want to visit this or other Anheuser-Busch theme parks more than once, a season pass may make more sense for saving you money.

As always with theme parks, if your budget allows I recommend looking into special programs and guided tours including Dine with Shamu (pretty reasonably priced and kids under 3 are free) or even SeaWorld camps, for a more educational park experience.

To add value to your park pass purchase, also note that there may be special musical programs included in the cost of your ticket: in May 2008, SeaWorld San Antonio features Viva La Musica, a celebration of Latin food and music, plus Christian and country music artists later in the year.

As a nascent geek, I’ve also been interested in SeaWorld’s use of Web 2.0/social media in a recent campaign to open their Journey to Atlantis ride — see Shel Israel’s post and video about this experiment with Internet marketing that turned out well for the park.

For my RSS/feed readers, here is the URL of the YouTube video below.

See you at SeaWorld!