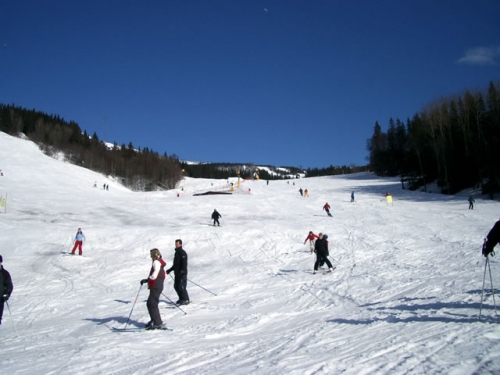 Today is the first in a two-part series of tips and guidance for families who want to ski.

Since I’m not a skier (had one cross-country lesson in Norway – now I’m in warm Texas without slopes) I’ve brought in a terrific guest poster for you.

Paul Johnson is the editor of the Family Ski Resorts Web site; he’s married with kids and has a family of avid skiers.

I thought he’d be the perfect guy to answer a few questions about getting kids started in skiing, how to put together a ski trip on a budget, good places for family skiing, etc.

He’s given very detailed and thoughtful answers, so to keep moving down the slope, as it were, we’ll continue the series tomorrow, in addition to the regular Photo/Video of the Week.

(If you are not a skier, check back tomorrow for Part II, because I’m not either and I asked Paul some questions just for us!)

1) When is the best age to start kids with ski lessons? Is it best to start with skiing or with snowboarding, if they’re interested?

Starting children with ski lessons anytime after age 4 is standard. 4 and 5 year olds will typically have the leg and ankle strength to adapt to the basic motion of skiing with relative success, especially if they have participated in other sports requiring balance such as skating, gymnastics, or dance. The focus at that age will be on turning and stopping (something that many adults could use a brush-up on.)

While this is a good age to begin lessons, parents shouldn’t expect too much progress at first – children at that age just don’t have the coordination to really grasp intermediate techniques. Those skills come around ages 7 to 11, when coordination is improving and children have more control of their center of gravity. If your family budget can handle it, it is a good idea to continue with some form of ski school until children are in their teens. They will experience spurts in both physical ability as well as interest, so it is good to incrementally add the new skills as they are ready throughout their growing phase.

There is really never a bad time to learn how to ski — I know several people who didn’t even see a ski slope until they were 20, took a few lessons and began doing it regularly, and are now excellent skiers in their 40’s.

It is generally recognized that younger children should start out with ski lessons instead of snowboard. Snowboarding takes a different level of coordination than skiing, and so much of the early skiing lessons simply involve the etiquette of the slopes – how to stop, how to get on and off of a lift, etc. Most ski resorts actually set different minimum age limits on the ski vs. snowboard school.

Solitude in Utah, for example, allows 5 and up into the ski school, but you need to be 7 to take snowboard lessons. Big Sky in Montana starts the ski school at 3 years old, but requires snowboard students to be at least 5. Call specific resorts for more information. A good skill base in skiing is important, as at least four major North American resorts, in addition to several European ski areas, do not allow snowboarding. You never know when your family might find themselves at a ski-only area.

2) How can parents minimize the expenses involved with skiing (equipment, lift tickets, travel, etc.) Is ski in/out lodging worth the added expense?

Our Web site lists several ideas for saving money on ski vacations in the “Where to Skimp, Where to Splurge” column.

The two single biggest determinants of cost will be the airfares (if applicable) and the resort you choose. Some high-end resorts, such as Deer Valley in Utah or the Aspen, Colorado area, are more expensive in nearly every category (lodging, meals, lift tickets, etc.) than smaller or more remote resorts, but you are rewarded by having world-class ski runs and amenities.

Once you’ve settled on a location, a few ideas for saving money include:

** Renting ski equipment at a non-resort location. Many ski towns have rental businesses away from the ski resorts which may charge less for the equipment. Weigh the savings, however, with the convenience of being able to store the equipment at the resort-based location each evening. On the ski rental topic, don’t splurge on the “high performance” skis. Most beginners or intermediates won’t notice the difference. Going with the “beginner” or slightly better “sport” option will suffice for 90% of us.

** Utilizing public transportation. Many Western ski towns, such as Aspen and Steamboat Springs, offer free shuttle transit around the main lodging, skiing, shopping, and dining areas, alleviating the need to rent a car.

** Make sure you have a condo with a kitchen so you can make some meals without going out. Given how draining a day of skiing can be, your family just may be content making a quick pasta at the condo and settling in for an evening of TV or reading.

** Package deals. Nearly every major ski resort today offers some form of skiing/lodging deal which can shave a few hundred dollars of the total cost of the vacation. A common deal is a three days skiing / three nights lodging package where you may experience some significant cost saving. These deals can fluctuate throughout the ski season, so it pays to call around.

Just as important as where to save money is where NOT to! There are things that you should really think twice about skimping on, such as lodging and ski school.

More than one horror story exists of a family finding bargain-basement lodging, only to realize it was three miles from the slopes while they could have been 100 yards from a lift by spending $10 more per night. It is also important to stay away from lodging that might attract large groups of partiers who try to cram 10 people in a room (they typically go for the budget accommodations.) Use the online hotel review sites to ensure people have had good experiences at particular hotels or condos, and don’t be afraid to move up from the economy lodging category.

Ski-In, Ski-Out lodging is often a great benefit in terms of convenience. It is nice to take a 30 minute break from skiing and then be right back on the slopes. However, at many resorts, the Ski-In, Ski-Out lodging is becoming dated, and newer, quieter lodging can be found just steps (maybe 200 yards or less) from the ski village. This is another area to research particular locations prior to booking your lodging.

As a general rule, if you can find Ski-In, Ski-Out lodging for the same price or just a few dollars per night more than off-slope lodging, you want to seriously consider it.

Thanks Paul, and everyone come back for Part II; we’ll talk about options for non-skiers and how climate changes may be affecting ski resorts worldwide.