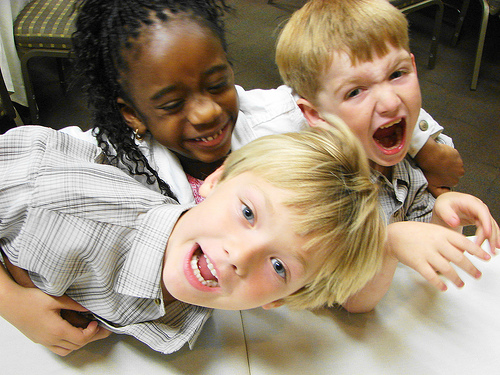 Sometimes, it’s a pain in the neck to travel with kids.

There, I said it.

I know that with over 200 posts (so far) on a blog about family travel, I must sound as though I have the whole thing nailed down, diaper bag and all, but I do not.

That’s why I had to grin when I read dooce today; she wanted a nice family trip to San Francisco and instead, everyone was just miserable.

She wrote that she’s still coming to grips with the whole concept of Being A Parent, even though she’s “finally stopped feeling guilty and embraced my version of that role. I knew that I loved my child, that I would do anything for her, but that I don’t necessarily do this thing like many other women. And that’s okay. I am okay with being the mother who doesn’t get a thrill out of sitting on the floor and playing blocks for two hours.”

Hey, I used to think that I, too, was missing some warm and fuzzy maternal gene, but I don’t like a lot of that stuff, either.  I’m much better suited to working with older kids, but both of my children had this annoying requirement of getting through baby and toddlerhood first.  What’s up with that?!

Family travel takes some perseverance, especially with mealtime issues like teaching your kid to try new foods in, say, Spain.  You know, it can be a hot, exhausting hassle to take the kids to Pompeii.  Some of the most convenient times to travel are right in the middle of the school year, and while you can choose to pull kids from classes anyway, that may lead to more problems.

Still, I do not believe that just because “I have kids, I can’t travel.”  The good far outweighs the bad.

Unfortunately, dooce continues to say that she’s disappointed in herself, that “Going on this trip forced me to realize another facet of this, that although I wanted to be the mother who could travel with her kid, I’m not. I can’t do it. I do not enjoy it. And I’m inclined to feel guilty about it, because I want that photo album with pictures of our family in front of interesting and far off places.”

Now, I know that this is easy for me to say, but IT WILL GET BETTER.

dooce’s daughter is about four years old.  My kids were each four years old once.  One of them was an old soul even at four.  The other was, well, on crack or something.

Fast forward to now.  One of my kids is a seasoned traveler and great company, the other is also seasoned but can get on my last nerve incredibly quickly.  I would never stop taking that child to see things, but I try to have enough sense not to set us up for too much frustration when I do plan a trip.

Hang in there, dooce.  You’ll be able to leave your heart in San Francisco soon….