Stepping inside the Little House (on the Prairie) 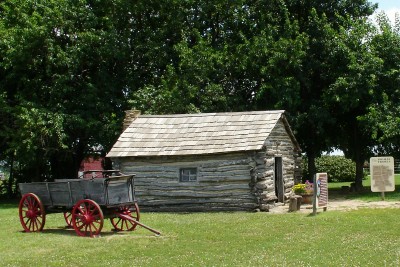 I had a wonderful experience today; my teenager and I visited the Kansas site of the original Little House on the Prairie, from the beloved series of books about pioneer life by Laura Ingalls Wilder.

After our stop in the historic Stockyards of Fort Worth day before yesterday, and a great time at the Chisholm Trail Heritage Center in Duncan, OK yesterday, we rolled across the Oklahoma-Kansas border and made a quick detour to see the Little House, thirteen miles southwest of Independence, Kansas.

As a child, I devoured the Wilder books and still have my well-thumbed paperback set, so this was a must-stop on our Midwest Road Trip from Texas to Chicago and back.

The tiny, rough one-room cabin is a labor of love reproduction of the house using the materials and methods of the day.

According to the Web site,

“Research of the 1870 census of Montgomery County, Kansas, located the ‘Ingles’ family in the eighty-ninth residence in Rutland Township. C.P. Ingles was cited as a 34-year-old carpenter along with his wife, Caroline, and three daughters, Mary, Laura [who became the “Little House” author Laura Ingalls Wilder] and Carrie. This 1870 census and the Ingalls’ family Bible record that Carrie was born on this site on August 3, 1870. The family lived here only a short while as they mistakenly settled on the Osage Indian Diminished Reserve. After hearing that they were to be moved, the family decided to return to Wisconsin. The Ingalls didn’t know it, but six months later, the Osages were moved to Oklahoma and they would have been able homestead the land. 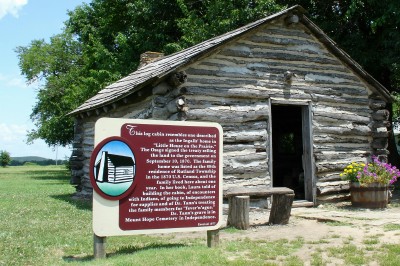 In 1977 local volunteers reproduced the Little House with special efforts to build the cabin according to descriptions in Laura’s book.

Many of the landmarks Laura mentions in her book can still be seen on and near the site. Walnut Creek, the bluffs to the north of the home site and the mention of the Ingalls going to Independence for supplies authenticate the site. Dr. George Tann, “Dr. Tan” in the book, who cared for the Ingalls family when they had “fever and ague” [malaria] is buried in Mt. Hope Cemetery in nearby Independence.”

I confess to becoming rather emotional when I read some of the documents posted inside the little log cabin; these books mean a lot to me and it’s always overwhelming when I reflect that they are true stories told by a woman who lived from the days of Conestoga wagons to jet airplane travel.

As I told my daughter, there’s a similarity between Wilder and Anne Frank of the famous diary; although thousands and thousands of people went through the same experiences (pioneer life in the American West and the Holocaust, respectively) it was two people just telling their own personal story who made that crucial connection of understanding with readers all over the world.

One person, one writer, really can make a difference.