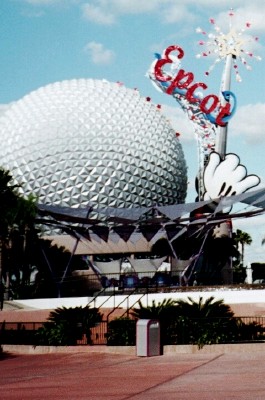 The Epcot (Experimental Prototype Community of Tomorrow) theme park, which was originally conceived as a futuristic community with people actually living in the park, has something of an identity crisis.

There are two sections to the park. Future World has excitement and G-forces, including a ride that occasionally kills people, but it’s combined with the fairly staid international destinations in the World Showcase.

Disney positions Epcot as a more appealing venue for adults — a permanent “World’s Fair” with special highbrow-ish events like the annual spring Flower and Garden Festival, plus the fall Wine and Food Festival (which gets an OK review here on Mousesavers; they generally like it but feel that the paid seminar-type sessions are overpriced.)

That’s not to say that there aren’t plenty of things for kids; mine had a great time. Then again, they’re both travel nuts and were really into the World Showcase pavilions of the different countries (comparing “Norway” to our actual visit to Norway was a treat.)

World Showcase venues often stay open later than the rest of the park since there are tons of different restaurants plus the nightly Illuminations fireworks/laser light show over the park’s lagoon.

Kids also like fun/educational rides like going deep into the sea on The Seas with Nemo & Friends, although you have to put up with Crush, the surfer dude Aussie turtle who is a takeoff on Sean Penn’s perpetually stoned “Fast Times at Ridgemont High” character Jeff Spicoli.

** This park summarized: Disney for grownups and travel enthusiasts (but you’ll really need a map.) Be ready to do some walking, but the wide-open pathways make it stroller-friendly even in crowds. Once older kids have knocked out the thrill rides they may bug you to leave the park, but try to hit a little of World Showcase for their edification. Bribe them with the varied international gift shops if you have to.

** Key tidbit: This park may work best towards the end of the day, if you want to kick back a little. Ferry boats (FriendShip water taxis) across the big 40-acre lagoon can save aching feet from walking all the way around the semi-circle of pavilions. There are boat stops in Mexico, Canada, Morocco and Germany. 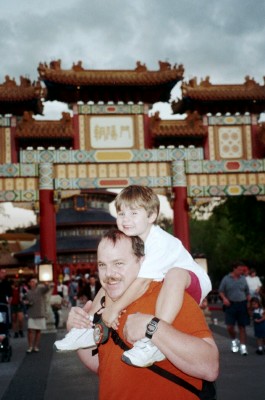 ** What to do as soon as you arrive: Get your FASTPASS times for Mission: Space, (blasting off in a rocket) Soarin’ (sort of hang-gliding above the sights in California) and Test Track (a racing ride.)

The thrill rides are the only ones with significant lines in this park. Read the restrictions carefully if you have medical problems, especially Mission: Space. They aren’t kidding about the G-forces.

Also grab a daily calendar for the park as you enter; there are lots and lots of small performances all day in World Showcase. We loved the Chinese acrobats and mariachi band.

If the front of the park is already packed, head to the back to start, just like I recommended for the Animal Kingdom.

** Indoor entertainment: Take a look at the well-executed 360 degree movies O Canada in the Canada pavilion, and Reflections of China in the China pavilion. You have to stand up (there are bars to lean on, though) and you can cool off indoors while enjoying the beautiful scenery and dynamic motion on screen. My kids were mesmerized.

** More entertainment: Epcot is big on free buskers/”street” performers (here’s a list) in World Showcase, so try to time your visit to certain pavilions so that you’re there to enjoy the entertainment.

** Dining options: How about eating right next to a massive aquarium? Check out the Coral Reef gourmet seafood restaurant in Future World — remember, 1-800-WDW-DINE gets you a reserved Advanced Dining Reservations timeslot to eat. Avoid lines when hungry!

** Attraction that surprised us: Shopping was great in the Japan pavilion, especially since we’ve lived in that country and could re-stock some items that have run out or been lost over the years. They even had interesting garden and manga/anime stuff. Catch a taiko drumming concert when you’re there. 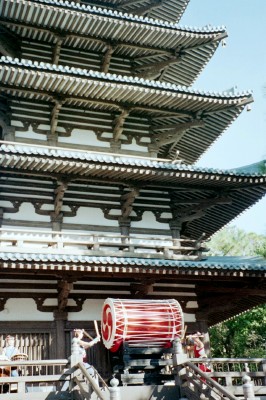 ** Lodging: Epcot actually has two entrances, and this is huge when it comes to lodging options.

In addition to the well-known entrance by Spaceship Earth/Future World (a monorail stop if you’re staying at one of the Disney hotels on the monorail line) there is also the International Gateway between the United Kingdom and France. Trams and little ferry boats (it’s lots of fun to come and go on the water) run between this entrance and these Disney hotel properties (only for hotel guests:)

These resorts also have easy access to Disney’s Boardwalk and the Disney-MGM park, and proximity/ease of transportation is one key to a good time at these massive parks.

** Special Deals: Ready? There are a bunch of behind-the-scenes tours at Epcot, and they’re all on the park’s Web site under Tours. Call (407) WDW-TOUR.

(There are a few more but the Disney site has been crashing on me all day today, so I’ll come back with the rest when it’s up or you can surf to the Tours page for Epcot.)

Update 29 January 2007 — the rest of the list now that crashes have stopped: Backstage Magic (7 hours, behind-the-scenes peek at not only Epcot but also Disney-MGM Studios and Magic Kingdom, min. age 16, $200 per person includes lunch at Mama Melrose Italian restaurant in the Disney-MGM park) Seas Aqua Tour (2 1/2 hours with 30 min. in the water in the aquarium, guests wear swimsuit and wetsuit, no certificates/quals needed, min. age 8, $100 per person) Hidden Treasures of World Showcase (3 1/2 hours to learn how the Imagineers re-created the Epcot countries and their landmarks, min. age 16, $59 per person.)

** Special/Disney Character Meals: At Epcot, there are character meals at the Garden Grill restaurant (which is literally part of the Living with the Land attraction, just like El Rio Del Tiempo runs through a Mexico’s San Angel Inn restaurant.) You can also have a Disney Princess & Friends breakfast at Norway’s Akershus Royal Banquet Hall/castle.

A fun place to cool off is the Coca-Cola showplace (Ice Station Cool) in Future World. Yes, it shills for Coke products, but they also have unique soft drinks from around the world to sample plus it’s literally snowing inside.

To wrap up, there’s no way to see all or even most of Epcot in a day, but that’s why it’s fun to come back to WDW again, and in different seasons. You’ll want to enjoy everything (and eat at all of the restaurants!)

Here are a couple more overview links….the overlooked/surprise Epcot goodies (like the cool fountains) from AllEarsNet.com, and Fodor’s blitz tour of Epcot.

Next up: Isn’t it handy that you can walk to Disney-MGM Studios via the International Gateway from Epcot, instead of slogging back to the Epcot front entrance? Good thing to know since the MGM Studios (complete with High School Musical) is the next park on tap in this series.