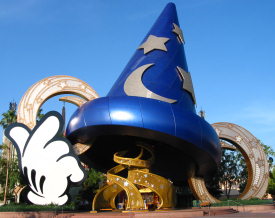 I must confess that Disney-MGM Studios is my favorite family travel park in Florida’s Walt Disney World (and not just because the water tower has massive Mouse ears.)

It appeals to me and my husband as an adult movie buffs, to our teenage daughter who loves Aerosmith’s Rock ‘n’ Roller Coaster, to our young son on a variety of levels, and to all of us with its wonderful evening show, Fantasmic!

It is also relatively compact, which is such a relief after making vast footsore treks across the huge acreage of the other parks.

** This park summarized. The magic of movies for all ages. This park is also particularly strong in live shows. Remember, the Disney company casts a wide net, so there is everything here from Narnia to High School Musical to an ESPN Sports Weekend in March.

** Key tidbit. With just a little forethought, you can have a nice early dinner and then avoid standing in line forever as you sit down in an excellent seat in the Hollywood Bowl-ish theater to enjoy the multimedia, everything-Disney-but-the-kitchen-sink Fantasmic! nighttime show.

Call (407) WDW-DINE and ask for the Fantasmic! Dining Experience package for the day you’re visiting. You’ll get a fixed price dinner and reserved dining time at one of the park’s sit-down restaurants (Brown Derby, Mama Melrose or Hollywood & Vine as of this writing.) We ate dinner at a rather ridiculous afternoon time at Hollywood & Vine because I didn’t call early enough and that was the only time left. Still, it was worth it to not have to wait two hours or more to get into Fantasmic!

Note: Unlike most “secret good deals,” which are usually laid out pretty clearly somewhere on the official Disney site, I could not find much/any info about this except on the unofficial Disney fan sites. Also, fair warning: this show may be too scary for very little kids.

** What to do as soon as you arrive. From previous posts in this series, you know the drill….if you want to get on the “screamers” like Rock ‘n’ Roller Coaster or Twilight Zone Tower of Terror, get that FASTPASS time right away. The Star Wars Star Tours ride tends to get rather crowded as well.

** Entertainment. Lots of live shows here, plus fun street performers on Hollywood Boulevard. In the one park where your feet aren’t killing you, the sit-down options abound.

** Dining options. We had a hilarious meal at the 1950’s Prime Time Cafe, where the meatloaf is hot and Mom says to get your elbows off of the table. There’s even a groovin’ lounge next door, but we couldn’t figure out how to stash the kids in a potted palm or something, so that we could go enjoy a libation.

** Attraction that surprised us. The fact that, at last, we were in a human-scaled, manageable Disney property was our first pleasant surprise. We loved the peek-behind-the-scenes of the Indiana Jones Epic Stunt Spectacular (complete with the giant rolling boulder,) and my young son couldn’t get enough of Jim Henson’s Muppet Vision 3D (just like any Muppets show, there are plenty of inside jokes and fun for the adults.)

** Lodging. There are no Disney hotels in this park.

** Special Disney/Character Meals. Have lunch with a Disney Imagineer at the Brown Derby. Preschoolers will enjoy the Play n’ Dine special meal with characters from TV’s Disney Playhouse.

** More tidbits. The soundtrack during Aerosmith’s Rock ‘n’ Roller Coaster is actually a compilation of their songs; I couldn’t get it out of my head so I asked a Disney Cast Member which one of their hits was playing as we were screaming up and down, and she said that it was a medley.

We always saw Toy Story characters at Al’s Toy Barn in the Backlot area, if you like those autographs and photo ops.

Go behind the scenes on a special Backstage Magic tour — it actually starts in Epcot but includes Disney-MGM Studios and Magic Kingdom plus lunch in Mama Melrose’s Ristorante Italiano. A mere 7 1/2 hours, $200 per person, minimum age 16.

One more link: the Fodor’s Blitz Tour of the park.

Next in line (or in the queue, for my UK readers) is the Big Kahuna, the Magic Kingdom.