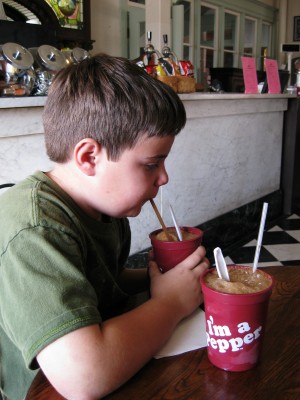 You have to really be into the Dr Pepper drink, and soda in general, to go through an entire museum devoted to the topic in downtown Waco, Texas.

For me, fortunately, that is not difficult.

I’ve been a fan of Dr Pepper since I was a kid (naturally, since both of my parents are from Texas where it started.) When the company changed the soda’s formula in the 1970s – from using cane sugar from Sugar Land, Texas to that icky high fructose corn syrup – I just KNEW that something tasted funny.

By the way, you can still get the original formula, made only in Dublin, Texas and now called “Dublin Dr Pepper.” I even made a video about it with Shashi Bellamkonda from Network Solutions during South by Southwest Interactive (SXSWi) last year.

Anyway, a road trip to the Dr Pepper Museum in Waco will tell you and the kids everything you could ever want to know about the origins of the drink and the history of the company.

There are even videos of Dr Pepper TV commercials to watch – you’ve never experienced such cultural whiplash as seeing advertisements from across various decades. 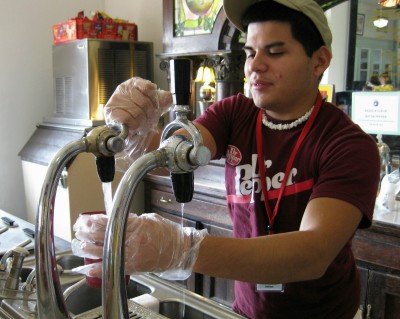 The museum has exhibits about soda creator Dr. Charles Alderton and his Corner Drug Store, displays of old-fashioned bottling equipment, original bottles and containers and dispensing machines from across the decades.

A small “Free Enterprise Institute” on the top floor extols the values of, well, free enterprise….with a “minimum of government interference or regulation.”  Given the current disastrous economic situation, I had to chuckle at that particular brand of rah-rah.

We finished up in the Museum’s snack bar/sweet shop, and ordered Dr Pepper floats made at a real soda fountain, with syrup and carbonated water hand-mixed by a person who used to be called a “soda jerk.” I’ll bet the current young man would prefer a different title.

Here’s my suggestion – unless you want your family’s teeth blown away from the combined sweetness of original Dr Pepper and vanilla ice cream, back off a little and just order the soda itself. That will be plenty of authenticity for you!