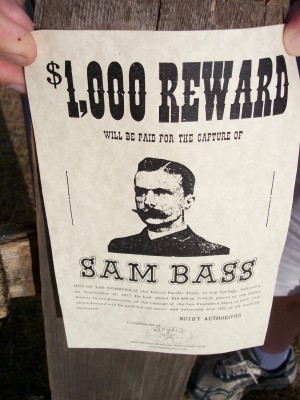 Part of the annual Round Rock, Texas Frontier Days July 4 celebration is a fun costumed reenactment of the 1878 Sam Bass Shootout.

The infamous bank robber Sam Bass was fatally shot by lawmen in Round Rock, and his name is plastered on things all over town including my son’s former baseball fields.

Actors used to stage the shootout reenactment downtown until the event became too popular, so it’s now held three times a day in pretty Old Settler’s Park during Frontier Days.

There’s a false-front recreation of town, dance hall girls, a voiceover narrative to explain the action, fake blood and loud firing of blanks – my son loved it.

I shot video at last year’s celebration; maybe it’s time to get it edited and online before we see it again this year!