Now, bear with me here.

My Mom already thinks the whole blogging thing is a little “out there,” so I can imagine what she and probably many of my Family Travel readers will think about me gallivanting off to travel through a world that doesn’t really exist.

I’ve just spent several hours over the course of yesterday and today on my computer, running around in the Second Life virtual world, dressed up as a punkish Goth avatar named Boadicea Merryman (my SL name.)

It didn’t cost anything; well, until I bought that virtual Frozen Pea Fund necklace as an American Cancer Society donation – all of about 40 cents – yes, you can spend real money there. 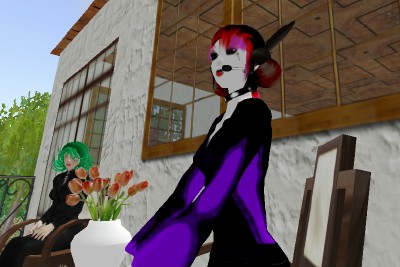 Since I do some Web 2.0/social media teaching and consulting work with the Every Dot Connects consortium, I make it my business to figure out new and intriguing stuff.  Since I could not attend the fabulous BlogHer blogging conference in San Francisco in person this week, I did the next best thing and attended the conference on my computer, in Second Life.

I had girly fun trying on computer-generated clothing in a virtual house with two giggling girlfriends, watched my avatar Boadicea execute some cool dance moves to an excellent DJ at two BlogHer parties,  attended a panel on how nonprofits can raise (real) money and make a (real life) impact through Second Life, and watched online with a bunch of other avatars in a sold-out Second Life virtual stadium as the Real Life BlogHer keynote speakers on 19 July (Heather Armstrong/dooce and Stephanie Klein) were live-streamed to us in video and audio from a San Francisco ballroom.

During and after each event, I met avatars/people and exchanged contact info. 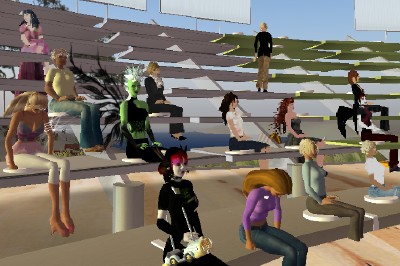 I feel as though I’ve had an amazing trip, really, and I didn’t have to pack, unpack or deal with security lines and airfare.

To those who would harrumph that this is all silly, and I should be writing things, like a good little writer, let me also point out that as I wandered the BlogHer SL Exhibitors Hall – with booths and displays from different companies, just like any conference – I stopped at conference sponsor AskPatty.com’s booth (they had a virtual racetrack at BlogHer SL where you could race all kind of cars, and they sponsored the parties as well.)

AskPatty.com is a forum and information resource about women and automotive issues, and one of its editors, Brandy, is also my editor at Automotive Traveler magazine.   There was an avatar standing at the SL booth, so I introduced myself, and doggone if it wasn’t Brandy, working at the Second Life conference! 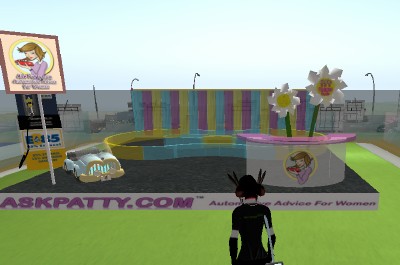 We even talked about a travel-related article that I’m going to write for AskPatty.com; never let it be said that you can’t do business in a computer-generated world (and I hope to join the next cyberspace press trip, too, while I’m at it.)

OK, so Brandy and I did geek out after that….we both opened another tab on our computer and went over to the chat/microblogging site Twitter and starting talking over there – she’s @hondagrrl and I’m @SheilaS.

There is a Second Life for teens (ages 13-17) so I’m going to see if my daughter wants to do some virtual traveling.