Tips roundup for the Netherlands 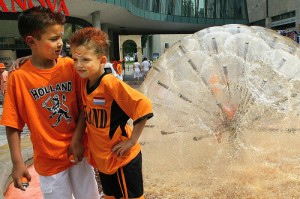 I recently had a request on my Facebook page for Netherlands vacation travel tips with kids….

“I came across your bio randomly as I was trying to plan a trip to the Netherlands at the end of August. I have three kids–16,12, and 8.

What kind of suggestions can you offer me for my travel plans? Any must-see places, any off the beaten path surprises–the kids have gotten rather fond of my penchant for doing that kind of stuff. Thanks for whatever help you can offer.”

Once I responded, I thought that I might as well put the same information here that I gave to him:

I haven’t been to the Netherlands in a few years, but we lived in the southern part of the country, down near Maastricht, which is easy to get to by train or car.  Ryanair flies into Eindhoven, too. This Zuid-Limburg “Dutch Alps” area is very pretty (its caves are cool – Rembrandt’s “The Night Watch” was hidden in local caves during World War II) and the pace is slower, so it’s great for families.

Look for the VVV (Vereniging voor Vreemdelingenverkeer, the Dutch tourism agency) signs in each town or city – they usually have English-speaking tourism experts and printed guides in English. You’ll pay a few euros for printed information; they aren’t as big on freebie handouts as American tourism offices.  Some would say that’s just the thrifty ways of the Dutch.

Ride bikes whenever you can, even if it’s just hotel-provided clunkers around town – it adds a whole new dimension to your travels to get around as the Dutch do.  I often tell people about seeing a young couple on bikes in Amsterdam, holding hands and talking on cell phones at the same time….yes, no one was touching any handlebars!  Not recommended for your children to try, of course.

Our favorite guidebook was Here’s Holland by Sheila Gazaleh-Weevers . Its level of detail makes it well worth trying to find a copy.

Amsterdam – love it – there’s the BootsnAll Amsterdam Logue, plus an older post of mine, Travel with kids to Amsterdam.

Waddenzee Islands are great for families – we visited Texel and Terschelling for some serene beach time, wide open spaces and seafaring heritage.

The maritime city of Rotterdam has fab architecture that’s good eye candy for kids. Go to the Kubuswoning or Cube Houses and take the more-interesting-than-you’d-think cruise tour of the giant harbor and port facilities.  Consider going in September for the very family-friendly Wereldhavendagen or World Port Days maritime festival; my kids had a blast seeing all the waterborne demonstrations and fireworks.

For local perspective, say hello to Guido at his blog Happy Hotelier: he runs the Haagsche Suites hotel in Den Haag or the Hague – don’t miss the Corrie Ten Boom house, for her inspirational story of Holocaust bravery. There’s also Daily Photo from the Netherlands blog and the expat-written, usually irreverent Curious Orange.

You can even hang out on the Hyves.nl Dutch-based social network.

Lots of good news, blogs and sites all on one page at the Netherlands Alltop Page.

I’d return to the Netherlands in a second!