Tired of flying or driving with the kids? Consider MegaBus

(This is a guest post by Sherry Ott, from her recent trip via MegaBus. I’ve been curious about these newer budget bus services, so I asked for her reactions. Thanks, Sherry!) 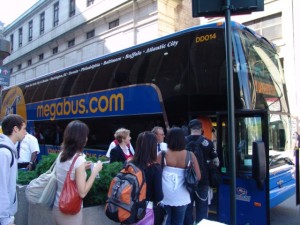 Travel on the US East Coast has changed.  “Taking the bus” is no longer looked down upon; in fact, it is quickly becoming the transportation choice up and down the coast and in the Northeast (and expanding to the Midwest.)

I’ve ridden buses all over the world, but I recently took MegaBus from New York City to Boston to give this American version of budget bus travel a try.

Megabus is hip to technology, so the best and easiest way to purchase your tickets is online at www.megabus.com. It’s a pretty standard web ticketing process, however I did manage to screw my ticket up (all my own fault) and booked 1:30AM instead of 1:30PM and realized this the day before I was to leave.

My screw up in ticketing allowed me to test out the purchase ticket in person option too – so for review purposes it worked out!

You can purchase tickets at a little booth across from the loading area in New York City.  The people there weren’t the friendliest, but they were quick.  Unfortunately when I went to rectify my ticket situation in person (as the call center person suggested I do), I found out that there were no more tickets left to sell for my bus and I would have to wait Standby.  This wasn’t exactly in alignment with what the customer service agent said, so the whole situation had my travel stress level quite high.

The boarding process reminded me of kindergarten.

Everyone had to stand in line, in the hot sun, while ONE guy tried to go around and check everyone’s tickets.  There were no signs for the lines, which resulted in a very inefficient process of people arriving and interrupting the ONE guy checking tickets to find out where to go. The seats were not assigned on the bus (note from Sheila: this could get interesting with kids) so once you got on, you chose your seat.  One guy also loaded luggage – so the whole process seemed a bit slow, and hence our bus took off about 20 minutes late.

I found out once I arrived at the loading area that MegaBus has a strict ONE bag policy.  Unfortunately I had two – plus a carry-on with laptop.  They clearly have the luggage policy labeled on their website, but I apparently missed it.  They don’t technically check luggage or provide receipts, but instead you place your ONE piece of luggage in the storage area of the bus.  I got around the policy by asking a woman next to me in line who didn’t need to check a bag to claim mine – whew.  It appeared the luggage policy was very loosely applied without a lot of predictability.

Even though the prices are like travel in less developed countries, the style isn’t.  In Vietnam, a four hour backpack bus trip to Mui Ne cost me about $10USD – and so did this trip to Boston!

The prices are great – especially if you book in advance.  The ticketing online provides you a confirmation number which you simply show to the guy checking you in.  Many people simply held up their phones and showed him the number; no need to print out a receipt.

For families this is an excellent option as a family of four stood with me in the Standby line and bought all of their tickets for $100; much cheaper than four airline tickets!

This is where MegaBus as compared to airline travel shines…each seat has a power outlet, and free wireless internet access is available to all.  The signal was great and I had no problem using that signal for four hours.

Each seat was reclinable, and fairly comfortable.  However, one downside about the seating was that unless you have a small notebook computer, the laptop space is really  cramped since there isn’t much room to put the laptop on your lap without hitting the back of the seat in front of you.  This setup made it really hard to type; practically impossible.  Plus – at times, the ride was rather bouncy, so if you are prone to motion sickness – working on your laptop might not be the best thing to do.  The setup was great for watching movies – but a bit of a pain to type of this review.

Tips To Make the Experience Better

My best advice is to bring a  jacket, even in the summer.  The bus became very cold after two hours.  The temperature didn’t seem to regulate.  Even the big guy next to me got cold!

Also – make sure you bring some snacks.  On my 4 ½ hour trip to Boston, we didn’t stop once – so be prepared.

I’d use MegaBus again, but I would also recommend to book in advance; Standby was a bit of a pain.

It definitely was more simple and cheaper than my other options to get to Boston; air or train.  Plus, I found it to be just as comfortable AND I was able to have an internet connection!  Bravo MegaBus!

To learn more about MegaBus in the US, go to their website at https://us.megabus.com and see their routes all over the US which provide some great alternatives to short air travel!  You can also follow them on twitter at @megabus or on the MegaBus Facebook page.

Sherry Ott is a refugee from corporate IT who is now a long term traveler, blogger and photographer. She’s a co-founder of Briefcase to Backpack, a website offering career break travel inspiration and advice. She also runs an around the world travel blog, writing about her travel and expat adventures at Ottsworld.