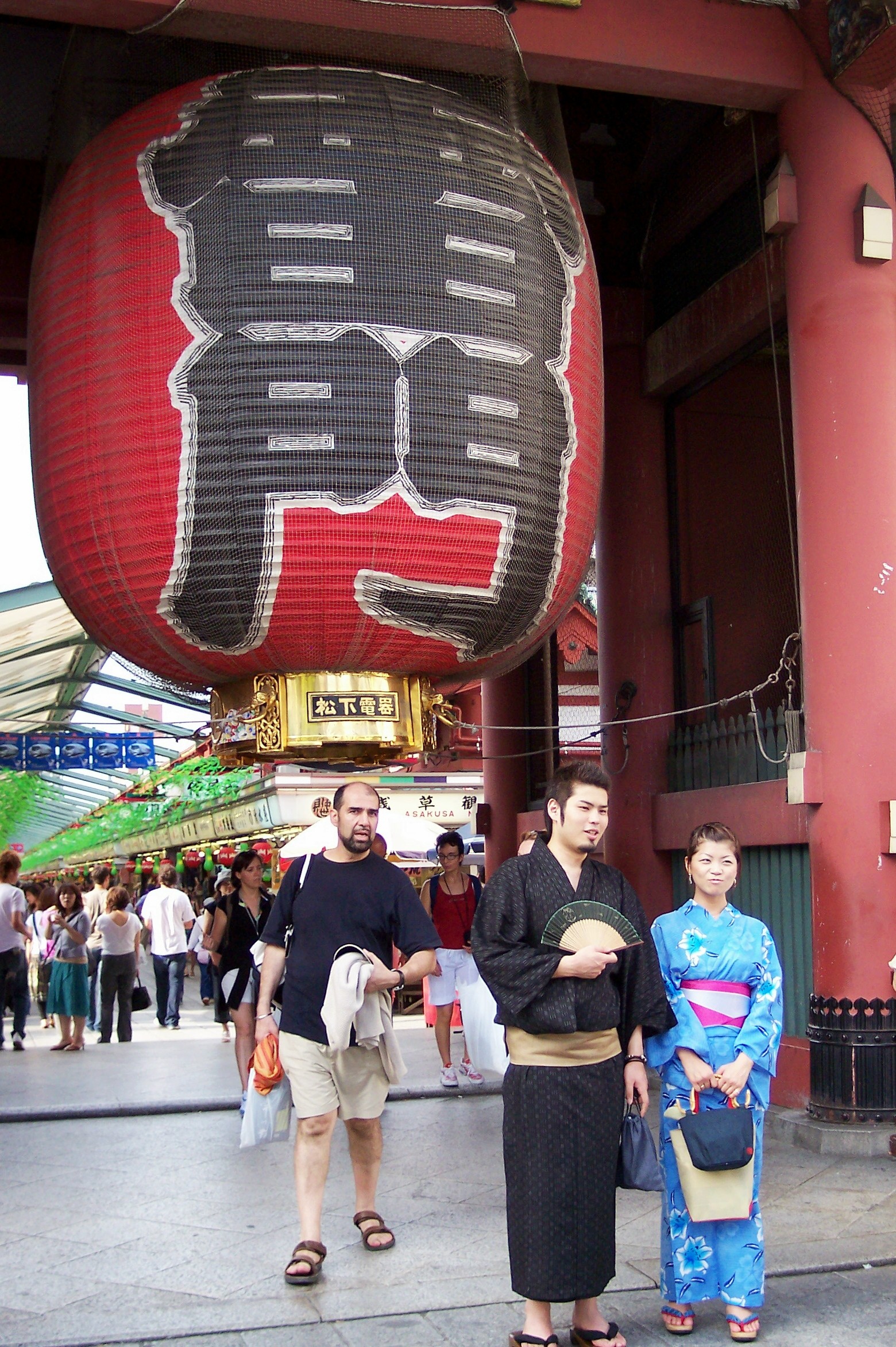 This is a nice combination of old shitamachi Edo (Tokyo) and some modern touches.

Take the subway to Asakusa (pronounced A-sak-sa) to see the lively Kannon Temple, the famous giant red lantern at its entrance and the fun Nakamisedori shopping street between the lantern and temple.

There is also a tourist office near the temple, with very helpful staff, maps and the all-important bathrooms.

If you have time, look for the Asakusa street called Kappabashidori; the shops there sell all manner of kitchen gear plus those marvelous fake foods that you see in Japanese restaurant windows.

The bowls of shrimp, seafood tempura, etc. are hyper-realistic and not particularly cheap, but great fun as table displays or gifts. I like my little ice cream cones that look like they’re just about to melt all over the dining room table.

The kids will have fun finding fairly inexpensive touristy stuff in the little Nakamisedori shops that lead to the Kannon Temple (don’t be alarmed at shop proprietors shouting “Irrasemase!!” when you walk in; they are just saying “Welcome.”)

Look for the little cell phone decorations that hang on a small string off of your phone; it seems as though everyone in Japan has a cluster of these netsuke-like items jangling off of their mobile, to personalize it. They make fun gifts to take home. This area is also famous for senbei rice crackers in all sorts of flavors.

I’m partial to the peanut version. 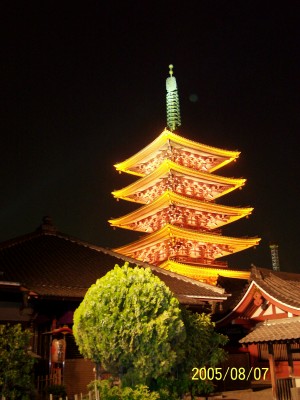 The temple itself is full of people and you feel as though you are walking into a postcard of quintessential Japan.

Step up to the cauldron in front….the smoke is supposed to help cure what ails you, so do as I did and waft some towards your face (to make you pretty) and rub the smoke on your head (to make you smart.)

I’ll let you know if it worked. 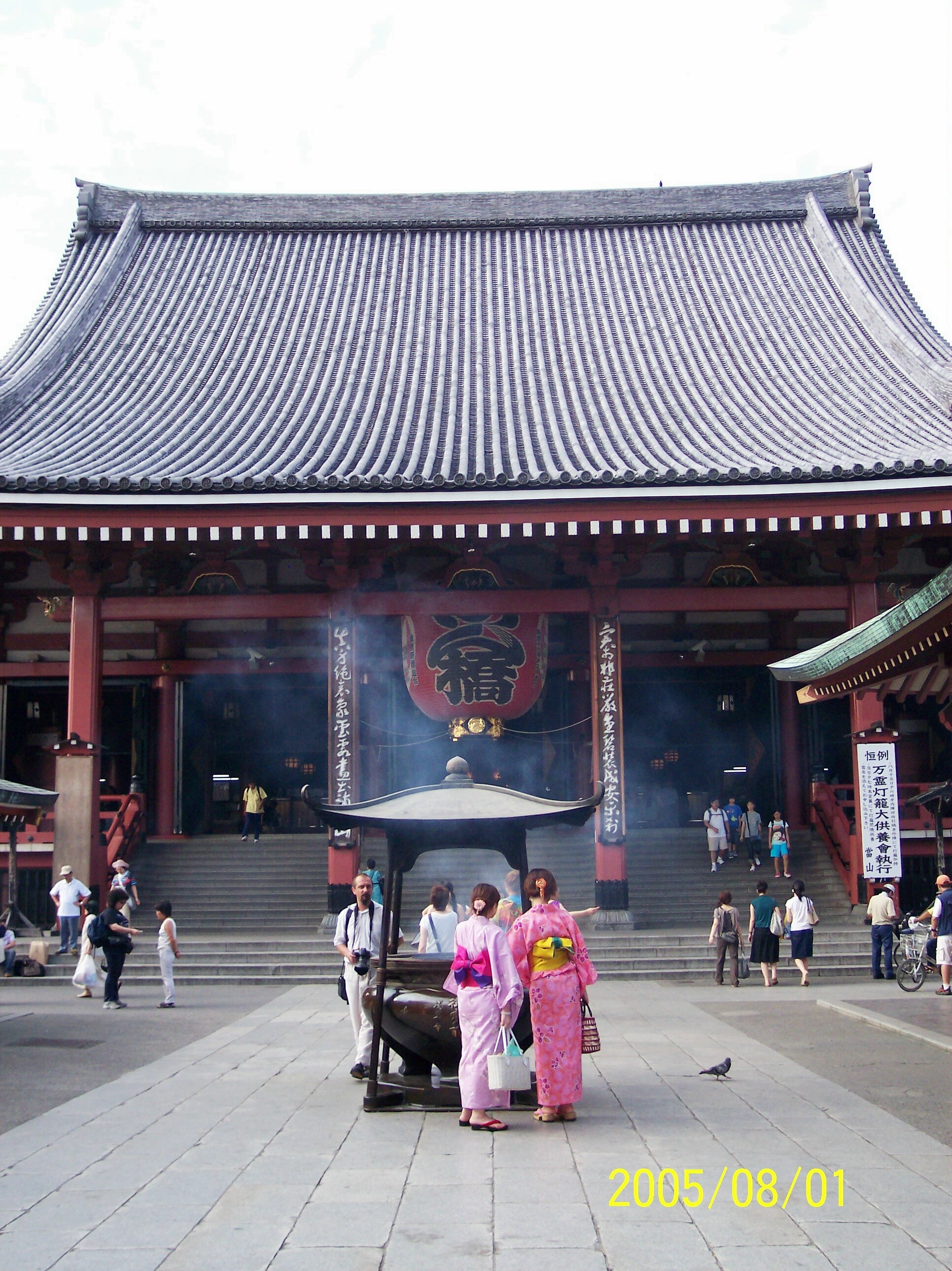 The fountain over to your right is for ritual purification, so before entering the temple you can follow this tradition by pouring water over your hands and wiping a bit on your mouth.

Clap your hands and toss in a coin to the offering box once you are inside, if you desire.

There are also small amulets to buy (one to help with driving or examinations for your teen, perhaps?)

After wandering about and enjoying the temple grounds, get ready to head over to the Sumida River for a boat ride.

Right next to the Azuma Bridge is the Suijo-Bus boat pier. Another landmark is the Asahi Building nearby across the river. Atop the building is a giant gold decoration that is supposed to be some sort of flame, but has become known as the Golden Poop.

Sure makes ME want to drink Asahi beer…. 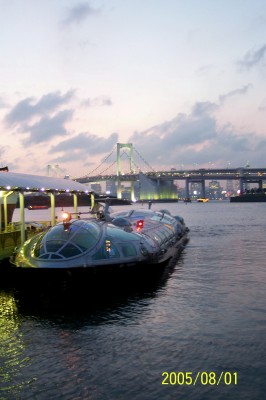 Take the swoopy silver futuristic-looking craft for a 40-minute ride down the Sumida to the riverfront entertainment and shopping complex at Odaiba, which is quite a contrast to Asakusa.

There are restaurants, video arcades like none you’ve ever seen, tons of shopping, a Starbucks if you’re jonesing for that, and for manga fiends there is a Jump Shop.

Parents, if you don’t know what that is, your kids probably will.

By the time you’re ready to leave it’s probably night, so for some great views, hop on the Yurikamome unmanned monorail. It will take you from Odaiba across the Sumida under a dazzlingly bright Rainbow Bridge, ending with some Blade Runner-ish scenery as you are deposited at the Shiodome subway station.