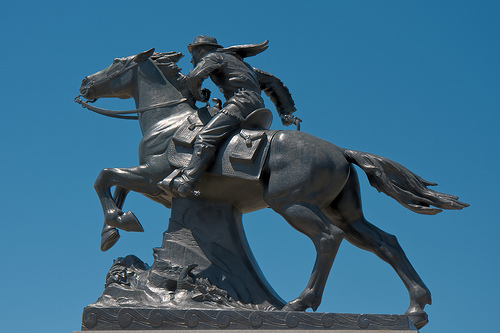 Trails are one of my favorite ways for kids to learn about history, because they give both a visual of movements and events (using a trail map) but then you can physically take them on the trail itself.

St. Joseph, Missouri (@StJoMo on Twitter) is one city that was the hub of numerous trails in American history.

The most famous is probably the Pony Express National Historic Trail; it runs for 1,966 miles from the launch point at “St. Jo” to California, and this year (2010) is the Pony Express Sesquicentennial 150 Year Anniversary.

You can visit the Pony Express Museum in St. Joseph – interestingly, the Express only lasted 19 months because once the telegraph was run and then the trains were established, there was no longer any need for it.

Explorers Lewis and Clark camped on the Missouri River near what is now downtown St. Joseph. The Underground Railroad passed through here, too; find out more about it along with other African-American history in the Black Archives of the St. Joseph Museum.

Close to St. Joseph (mostly to the south and into Kansas) are more trails to explore: the Santa Fe Trail, the Oregon Trail and the California Trail.

Here is a National Park Service list:  all the National Scenic and Historic Trails.

For maximum fun, plan a trip to St. Joseph on the second full weekend of October, when the town goes orange for the free PumpkinFest fall festival (including hundreds of carved, lighted pumpkins on the “Great Pumpkin Mountain.”)