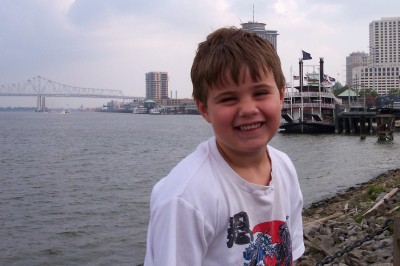 Many thanks to all of the readers who have patiently waited for more frequent family travel blog posts from me as I move from Florida to Texas.

We are all staying temporarily with my parents while the Austin TX area job-hunt/house-hunt is in progress (that’s 2 adults, 2 kids and 4 cats, but who’s counting.)

I hope to get back to posting much more frequently now that the WiFi is up and humming.

During the drive to Texas, I decided to pull off of Interstate 10 for a few hours and do a “pulse check” in New Orleans. I felt that it was very important for me as an American citizen and as a traveler to judge for myself how one of the major American cities, and an international treasure of music, food and culture, was doing in its recovery from the devastation of Hurricane Katrina.

I lived in a Big Easy suburb called Harvey LA a few years back and have visited since then as well, so I have some knowledge of the city, but when I say this is a “snapshot” that’s exactly what I mean — quick impressions from a 2-3 hour visit, with my 2 kids, in the French Quarter area around Jackson Square.

The drive to the center of the city was an eye-opener as we drove across one of the Lake Pontchartrain bridges and through eastern New Orleans. Miles of empty, blasted-out apartment complexes and blue-tarp-roofed subdivisions are still uninhabited, with fences and privacy walls crushed and flattened.

If you are driving in from the east and take the off ramp from I-10, turn right (instead of left towards the tourist areas near the Mississippi) and you are immediately looking at more deserted, boarded-up housing areas and crumpled homes with the famous spray-painted indications of whether bodies were found within or not. Many, many tall office buildings are dark and deserted, with more than half of their glass windows blown out and staring blackly down on the streets. My children were very subdued as they took it all in.

The smashed landscape goes for miles and looks as though it happened just 2-3 months ago, not last summer. This city is not “bouncing back” anytime soon and it is a shadow of what it was.

Yes, a few twists and turns found our minivan somehow absurdly cruising Bourbon Street, and that “den of iniquity” looks pretty much the same as always (this detour was not in my original quickie sightseeing plan, but my teenage daughter got to hoot at all of the girlie bars and soused adults wandering about.)

But drunks carrying daiquiris is not New Orleans.

The residential and business districts were dealt one hell of a body blow from which they are very slowly recovering, and all the powdered sugar beignets and chicory coffee slurped down at Cafe du Monde do not a real, live, sustainable city make.

I walked the kids up the levee to look out over the mighty Mississippi River and over at the venerable Huey P. Long Bridge. A guitarist was positioned near the steps down to the river; I was happy to see a musician and I threw a couple of bucks into his guitar case.

I join with Budget Travel Online’s recent article to urge you to visit the city and spend your money there now, rather than “someday.” Yes, family-oriented options may be a bit limited (although the world famous riverside Audubon Aquarium has re-opened) but try to focus your family on the culture of Mardi Gras and the wonderful food and music.

My kids just had fun eating beignets, seeing a new bride go by in a carriage while tossing beads, and buying silly skull stuff at a voodoo shop. Also, other areas of Louisiana (like Cajun Country) were relatively untouched and are looking for visitors.

So, where y’at? Go visit, take your family, and support this wonderful city. It needs you.

Update 30 Sept 2006: Another plea for tourists to visit New Orleans, from Arthur Frommer.

Update 02 February 2007: Smarter Travel updates us on how things are going in New Orleans; a mixed bag but improving.

Update 28 February 2007: World Hum, one of my favorite sites, has some links from terrific writers who are covering the situation in New Orleans.