Travel with kids to Amsterdam 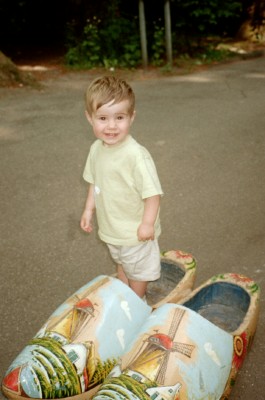 I’m a huge fan of the Netherlands, probably because I was lucky enough to live there for a few years.

Like most people in the U.S., however, I really didn’t know very much about the country beyond Hans Brinker’s silver skates and the whole wooden-shoe-and-tulip shtick, plus people apparently smoked weed whenever they wanted and lived in teensy houses. Doesn’t sound like much of a place for families, does it?

Let’s take a look at the biggest city, Amsterdam….

It’s so much fun to visit a city that’s human-scaled and walkable; you can see a lot without spending a ton of money and time on transportation, and you don’t feel so overwhelmed while trying to juggle kids and sight-seeing. Amsterdam is a city built on basically concentric/circular canals, so it’s possible to walk, ride rented bikes or hop the tram/bus/canal transport to get to places, and you can cut across canals to shorten the journey.

If you rent a bike, pay attention, because these guys are pros. I saw one couple riding their bikes holding hands and each talking on cell phones with the other hand, yet still somehow managing to steer without a single finger occupying the handlebars.

So much of the city is, well, unbearably cute and charming. Houses really are tall and skinny, with incredibly narrow staircases, because people were taxed on the width of their buildings, so they made them as narrow as possible. The stereotype of national tight-fistedness is somewhat true (remember “Dutch treat” dates?) because the Dutch do take pride in thrift and lack of ostentatiousness. They are also big on openness; that’s why their houses have large windows in front, to show passers-by that they’ve nothing to hide. (By the way, we also learned while living there that you must keep that window sparkling, and regularly scrub your front door and front stoop, or be considered the neighborhood slobs.)

An urban area near water like Amsterdam is always appealing to me; it’s such a stimulating mix of city life and nature. If you and the family need more open area for running around, there are several parks, including Vondelpark, het groene hart (the green heart) of Amsterdam. The Royal Concertgebouw Orchestra sometimes gives open-air concerts in Vondelpark, usually free in the summer, and there are playgrounds to burn off all of that energy. You can grab a snack — try the frites (French fries) which will come with mayonnaise, not ketchup (if you ask for ketchup, you’ll get an Indonesian version with curry.)

The art museums are a big draw, and will work with kids if you are willing to go through them pretty quickly. Even smaller children can enjoy Van Gogh‘s colorful sunflowers, created with his characteristically thick daubs of paint. Although it’s under significant renovation until mid-2008, the stunning works at the Rijksmuseum are worth a visit. Don’t miss the massive “Night Watch” by Rembrandt — it’s beautifully displayed/lighted and quite breathtaking. You can even cycle with Rembrandt, riding bikes through the places that he lived and painted, or go visit his house.

As I found when taking kids to the Louvre, just keep moving, and enjoy what appeals to you and the kids without worrying too much about the “arty stuff” unless you’re/they’re interested.

The Anne Frankhuis (Anne Frank House, the “Secret Annexe” of the World War II Jewish teenage diarist) is a must-see, although the crowds can be huge. Try for an evening visit, since on some days they’re open until 9 p.m. My older daughter, a pre-teen at the time, was glad that we had taken her there when it came the inevitable time to read the book in middle school. It’s very sobering to try to explain the Holocaust to a child, that’s for sure, but I think it’s important if yours is ready. If you visit the nearby town of Haarlem, you can also see Corrie ten Boom’s house, the Hiding Place, where she and her Christian family sheltered Jews during the war, at great personal sacrifice.

Don’t worry too much about the famed Amsterdam red-light district; we accidentally wandered through a few blocks of it and had to figure out how to explain to my son why the ladies in the windows were waving at him (my daughter figured it out pretty quickly) but no apparent harm was done. My daughter was quite embarrassed at a couple of randy postcards she found at tourist kiosks; they portrayed, um, erect male members with colorful wooden clogs hanging off of them. I just kept picturing the photo shoot for that postcard, and cracking up. The sale of marijuana in the “coffee shops” is actually quite regulated, and you won’t really see many stoned people wandering around, contrary to legend.

The New York Times has tips for making Amsterdam more affordable, and for hotels I always look at the Frommer’s listings. Try for a place near Museumplein/Vondelpark, since that area tends to be quieter and better for families. There are nice markets where you can pick up broodje (sandwich) fixings for picnics (we always gorged on kaas, or cheese, in the Netherlands.) The Concierge.com site, which is basically Conde Nast Traveler, has some good links and stories about Amsterdam, and the Amsterdam official tourist Web site is always helpful. The Dutch tourist offices are called the VVV, with a distinctive blue and white logo, and they also have material and suggestions.

Side trips are worth considering, because the country is so compact. The LA Times has a good article on cycling tours, “Taking Holland for a Spin,” and you really shouldn’t miss the nearby Keukenhof gardens. A barge cruise (taking a slow boat to Delft) is a little grown-uppy and staid, but older kids might enjoy a slower pace and plenty of time to experience canal life.

Finally, it’s a bit PG-13 for a family site, but you really must read Agent Orange, one person’s hilarious encounters with the Dutch in all their glory.