Travel with kids to Iowa 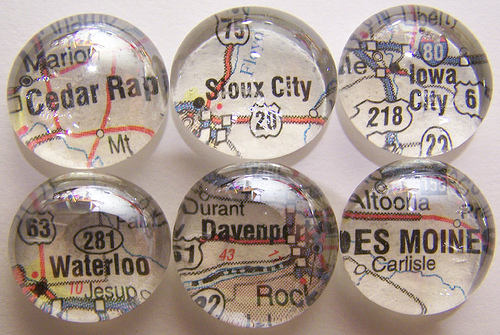 (This is a guest post by new blogger Jessica O’Riley at the Iowa Tourism Office – give some travel love to the Midwest!)

With a 6-year-old and a 3-year-old at home, family-friendly attractions are high on my list of vacation locations. Luckily, our home state of Iowa is filled with many options that don’t break the bank.

Some suggestions for you:

National Mississippi River Museum and Aquarium in Dubuque: The new “Venom” exhibit features colorful and venomous creatures including spiders, jellyfish, bugs, scorpions, poison dart frogs, snakes, lizards and fish. Visitors can zoom in on the animals with a special camera and crawl through a rattlesnake exhibit that gets them a “prey’s-eye view” of a rattlesnake. Wildlife eco cruises run through October.

Phelps Youth Pavilion in Waterloo:  The Waterloo Center for the Arts launches a world of wonder, discovery and learning. Kids can “ride” a tractor through a Grant Wood painting, travel back in time with a time machine, perform on stage and learn about creativity in other cultures.

This just opened in early April and we visited during the second weekend. My kids spent about three hours exploring the museum – especially enjoying the dress up and stage area – and I actually had to tear them away from the exhibits when it was time to leave. 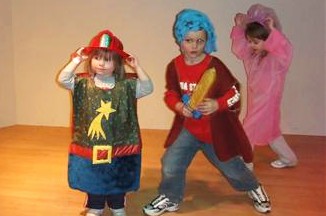 King’s Pointe Resort in Storm Lake: Cutting-edge water slide technology takes this water park to a whole new level. At the top of the Discovery Plunge slide, riders can select one of eight adventure themes – including storms, sea creatures, hot air balloons and sharks – and experience it on their descent, complete with sights and sounds.

Matchstick Marvels in Gladbrook: Local resident and artist Pat Acton has glued more than three million matchsticks together to create detailed works of art ranging from the U.S. Capitol to Pinocchio. His version of [Harry Potter’s] Hogwarts was purchased by a museum in Spain. Ripley’s Believe it or Not has also purchased several of his models. He is currently working on Minas Tirith from the Lord of the Rings; it should be completed in 2009.

Fun City in Burlington: This ultra family-friendly destination includes an indoor/outdoor water park, 24 lanes of bowling, electric indoor go-karts, arcade, laser tag, restaurants and a hotel all under one roof. We visited in February 2007 so just did the indoor water park. There are lots of slides for little kids, a dump bucket and even a climbing wall. My son especially enjoyed the indoor go-karts as he was tall enough to drive his own. They also have two-seater carts so those not tall enough to drive on their own can ride with Mom or Dad. The kids have been talking about going back since we left. We’re heading back down yet this summer to do the outdoor water park.

Having the hotel connected makes it easy to take a break from all the activities and rest. You’ll want to make time to get away to visit Burlington’s most famous landmark – Snake Alley, dubbed “The Crookedest Street in the World” according to Ripley’s Believe it or Not. 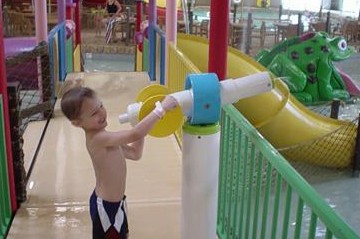 Ice Cream Capital of the World, aka LeMars: More ice cream is made in LeMars by a single company (Wells Dairy, makers of Blue Bunny ice cream) than anywhere else in the world.

And it’s never too early for ice cream – early morning visitors to the 1920s-themed ice cream parlor can enjoy cinnamon rolls topped with icing made from melted ice cream.

We took our son to the Day out with Thomas before our daughter was born and he really enjoyed it. In addition to the train ride, they had inflatables, a large Thomas the Train set for kids to play with and photo opportunities with Thomas.

(Thanks very much to Jessica and the Iowa Tourism Office for sharing family-friendly Iowa insights and photos.)