Update on travel with kids to London 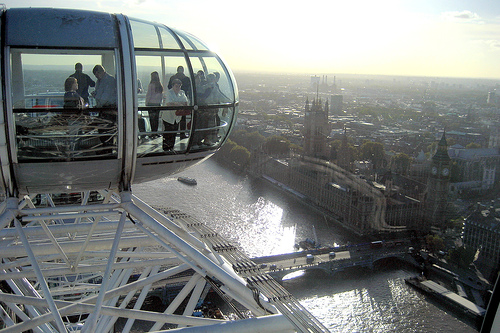 Maybe you’re being beaten bloody by your kids to go check out Harry Potter film locations since there’s a new Potter movie coming out this summer. Maybe you’d like to enjoy the Thames, exploring maritime heritage in a side trip to pretty Greenwich, or East London surprises like Canary Wharf.

Maybe you want to see England, Scotland or Wales now, simply because you never have before! Americans tend to think quite highly of the British, even with their quirks.

For whatever reason, if you’re planning a London or UK visit this summer or fall, just make sure that you’re ready for sticker shock.

The current exchange rate is making the already outrageously expensive spots even worse than usual. The budget travel guru himself, new blogger Arthur Frommer, just wrote about it in terms of the high costs at some of the more popular European destinations. (If you are going to Europe at all, check out the latest updated info on various countries from Rick Steves and his top sights in London.)

Still, if you insist….

There are some freebies left in London (here’s ten of them that don’t include the usual fallback of museums) and Budget Travel tries to help with some kid-friendly hotel ideas and hotel rooms around $200/night, which is unfortunately often the norm for price. If you’re curious about Japanese capsule hotels, you can give one a try near London at the Gatwick airport, but I don’t know about squeezing in the kids. If money is less of an issue, how about this unusual hotel and its themed rooms?

The International Herald Tribune chimes in with budget places to eat.

Perhaps the shortest possible visit will help you save those pence — London in a weekend?

Other general London info I’ve found recently: the wonderful thoroughfare of Oxford Street is full of fun, and navigating the city is easier when you “mind the gap” and understand the Tube or Underground (subway) system — the UK newspaper The Guardian has an Underground Guide to help you.

They also give us the lowdown on good UK vegetarian places to eat, plus fun things to do in swank London hotels without actually staying in one (I’ll skip this recommendation at the Dorchester hotel: “The most unforgettable experience is to arrive for breakfast in the Grill Room, which is a cross between a Spanish palace and baroque chapel. This is a temple to traditional British cuisine, serving grilled kippers, bubble and squeak, lamb kidneys and kedgeree – the creamy dish of curried smoked haddock and rice that is the ultimate early-morning test of an enthusiastic foodie.”)

If you’re considering leaving the UK and crossing the English Channel during your trip, remember that you can still go the old-fashioned way — by sea. The UK’s Times newspaper has a complete guide to cross-Channel travel. You can also explore the UK by train; take a look at train enthusiast site The Man in Seat Sixty-One’s UK train travel page (hat tip to Vagablogging for telling me about this site.)

Finally, Frommer’s has a new podcast on London for the whole family that you can download and sneak onto your kid’s mp3 player.