Who’s on first in Jamestown? 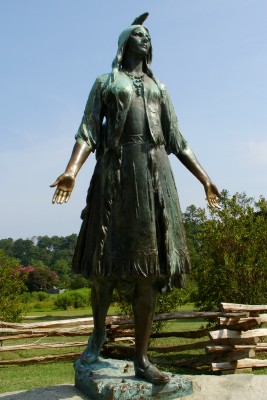 Thirteen years before the Pilgrims landed in New England, a small colony of male English settlers arrived at a spot on Virginia’s James River that is now called Historic Jamestowne.  We visited the original 1607 landing site today, plus a larger exhibit called Jamestown Settlement, as a part of our Historic Triangle tour this week (Williamsburg, Jamestown and Yorktown.)

Yesterday we explored the 1770s in Colonial Williamsburg, plus a little roller coaster action at Busch Gardens Europe, but much of today was spent learning about the first permanent English settlement in the New World.

It’s always interesting to see how historians (and tourist organizations) try to capture “firsts” in the United States.  I’m not even going to get into those Vikings, who really got here first.

Way back in my day, we were taught that the Pilgrims were first to come to America.

Then, OK, those guys in Jamestown were really first.

Well, maybe they should be called the first English settlers, since you have to acknowledge that the Spaniards founded the Florida city of St. Augustine even earlier, in 1565.  St. Augustine is now touted as “the oldest continuously occupied settlement of European origin in the United States.”

You have to call Jamestown the first permanent English settlement because some earlier English colonists gave it a go just south of here in North Carolina in 1584, but they disappeared around 1590 and are known today as the Lost Colony (visit Fort Raleigh in Manteo NC to learn more.)

Imagine trying to explain all of these “me first” gyrations to a bunch of kids.

Anyway, a visit to Jamestown is well worth your while.  There are two places to see; Historic Jamestowne and Jamestown Settlement.

The original landing site at Historic Jamestowne is managed by the National Park Service and is pretty low-key, with a few indoor exhibits, commemorative statues and some reconstructed buildings.

The big attraction here, for my family at least, was the ongoing work of archaeologists who are still busy excavating the site and bringing up new treasures from the dirt.  Kids can watch work in progress and talk to the scientists and volunteers.  The Archaearium building is carefully constructed over the original foundations of the brick statehouse building that was here from 1660-1698.  Visitors can look through observation ports into the ground below and view numerous artifacts that have been found throughout the Historic Jamestowne site.

My kids really liked the two skeletons that are on display (go figure!) complete with extensive information about the detailed forensic and research processes that scientists and historians use to determine who the people are and why they were important to the Colony.  Even my daughter’s school science classes on DNA came in handy, since that was a large part of the research puzzle.

We also learned the real story of Pocahontas; let’s just say that Disney didn’t quite get it right in the movie.

The second half of our visit was to Jamestown Settlement just down the road, where we found a reconstructed Powatan Indian village, the James Fort and replicas of the three ships that carried the colonists to Virginia, led by Captain Christopher Newport aboard the Susan Constant.

More on that as soon as I can find time in the schedule to write up the post for you.