Why would a magazine have YOU write their articles? 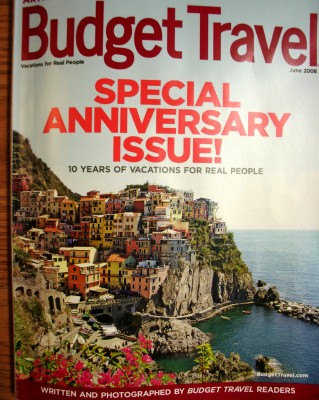 The latest issue (June 2008, the magazine’s 10th anniversary) of Budget Travel, one of my long-time favorites, is entirely written by amateurs.

That’s right, some goober down the street tells you how to travel to places like New York City and Arizona’s Navajo Nation and Hong Kong and Reykjavik, Iceland.

You know what? They did a great job of it, too!

Months ago, I noticed several “calls for input” on This Just In (Budget Travel‘s blog) for this special written-by-the-readers issue. I passed on the opportunity because, quite frankly, as a full-time writer I’d rather be paid to write for their publication.

My print copy hadn’t even landed in my mailbox before a little related dust storm hit the Travelwriters.com bulletin board, with the topic thread title “Amateurs write for Budget Travel.” Experienced writers on the BBS huffed that “maybe the editors would like to go back to hiring professional writers” and “getting them [readers] to write an entire issue does seem more than a bit risky.”

Remember, these are folks like me; professional writers and journalists who have been crawling through assorted destinations for years, finding the nuggets and describing the world with practiced, beautiful prose. They take pride in their work and are understandably peeved at wads of free user-generated content (like that on TripAdvisor, for example) pushing aside their years of analytical experience and their paychecks.

One travel writer, though, nailed it — and in my opinion it’s thanks to his lengthy experience working online.

Durant Imboden from the excellent Europe for Visitors Web site said in response, “Didn’t Glamour [magazine] used to publish an issue that was edited (obviously with adult supervision) by college students? This sounds in that same vein. A clever idea, really, if it encourages a sense of community/participation and helps to retain subscribers at a time when travel magazines are threatened by the Web.” (emphasis mine.)

(Update 28 May 08: I did a little research, and it was actually the now-defunct “Mademoiselle” magazine that used to have selected female college students write and edit their August issue. Sylvia Plath used her experiences as one of those writers/interns when she wrote “The Bell Jar,” and journalist Lynn Sherr wrote on the “Huffington Post” about her experience as one of those interns.)

It’s no secret that print media is struggling. It is used to making money by selling subscriptions and advertising, and advertising companies are still sorting out how to move their money online as print media revenue drops. Ad companies pay HUGE money to get their print ads in front of me in magazines, and I blow past them just like I mute ads on television and immediately shred direct mail solicitations.

Magazines, if they’re smart, are trying a variety of revenue and content-publishing models. Budget Travel is smart, and that’s why I subscribe to them; I put my money where the talent is. They cover down-to-earth, relatively unusual travel destinations like eastern Kansas, always with one’s wallet in mind and without the doofus nouveau riche Rolex-studded pretension that I find in the glossy Condé Nast Traveler magazine (one exception is Traveler‘s consumer travel editor Wendy Perrin, who seems to demonstrate in her Perrin Post blog that she’s heard of a budget.)

If you don’t already subscribe, head over to your local newstand or book store and get the June 2008 issue of Budget Travel magazine. Keep them in business.

The reader’s issue is well-written by regular people who love to get out, see the world, take good photos and then come back and tell you about it (with admittedly a lot of help from the BT editors.) I thoroughly enjoyed the issue, just as I like the magazine and their lively blog. Put your money where the worthy talent resides.

Thanks for trying something new, Budget Travel editors. As a writer, I’m not offended at all if it keeps you on the newsstand and in my mailbox.

Now I need to think up some good travel article pitches to send in your direction….