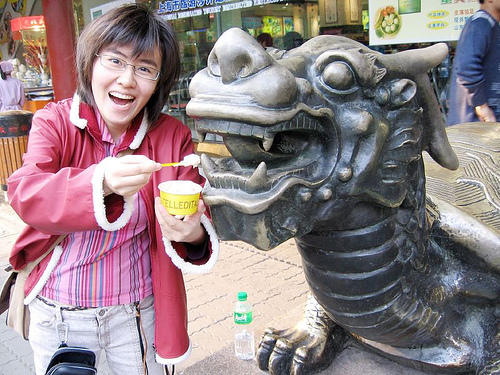 It’s the dog days of August, and the heat has me and the kids thinking about ice cream.

Here in Texas, we’re only an hour or so away from the Little Creamery in Brenham, home to fabulous Blue Bell Ice Cream, so I have access to really good stuff.

Their Cookies n’ Cream is the best, period, and they also make unique seasonal flavors like Cantaloupe ‘n Cream, from fresh Pecos cantaloupes.

Of course you can visit the Brenham facility, as well as Blue Bell Creameries in Broken Arrow, Oklahoma and Sylacauga, Alabama.

Visitors to New England have often made the detour to Vermont to stop in at Ben & Jerry’s for their factory tour, but let me also take this opportunity to rave about one of their new flavors with Texas ties, “Willie Nelson’s Country Peach Cobbler,” which is peach ice cream with cinnamon-sugar shortbread bits mixed in.

I’m telling you, I almost ate an entire pint in one sitting.

How about ice cream elsewhere?

That intrepid guide to the urban jungle, Gridskipper, offers up their views on New York’s best ice cream, complete with a handy map. There are suggestions from readers down in the comments, too.

The adventurous can check out green tea ice cream in Japan (I did, and I vote for drinking said tea rather than eating a cold version of it.)

Conde Nast Traveler magazine recently featured a wonderful Gully Wells article about the islands of Paris (“The Cradle of Paris“) but the important thing is that she mentions that French ice cream temple, Berthillon, on Ile St-Louis.  Fair warning — it’s closed during parts of August, when all of France seems to go on vacation.

If you’re eating your ice cream at home, check out the foodie Web site CHOW; it has the scoop on snazzy ice cream tools like waffle cone-makers.